'Hermione' exhibition and village area opens in Portimão 8-10 May

A replica of the ‘Hermione’ is to moor in Portimão as part of a multi-stop journey that started in la Rochelle and ends up in Bordeaux in June.
On the 8th to 10th of May, the public can go onboard (€3-a-ticket) and at the quayside there will be music, entertainment and exhibitions as the  area is to be turned into the 'Village Hermione LaFayette' - with stands for food, handicrafts and information.
This temporary village will be open from 09:30 to 23:00 on each day and has free entry.
The original 'Hermione' became famous as the vessel on which Marie-Joseph Paul Yves Roch Gilbert du Motier, known to his chums as ‘the Marquis de Lafayette,’ returned to America in 1780 with the French king’s promise to send an army and a fleet to help give the British a kicking in the American Revolutionary War.
The combined forces of the French navy and American armies eventually cornered British general Charles Cornwallis in Virginia and staved off the enemy fleet in New York, sealing America's independence from the British empire.
Lafayette was a friend of George Washington, Alexander Hamilton and Thomas Jefferson and went on to become a key figure in the French Revolution of 1789 and the July Revolution of 1830.
The events in Portimão on May 8th to 10th will welcome the replica 'Hermione.' This initiative has been organised by the Algarve delegation of the Union des Français de l'Étranger which aims "to reinforce Portugal’s love of France that long has united the two countries."
The relationship was not so loving in 1807 when Napoleon’s troops invaded Portugal, marking the start of the Peninsular War.
The presence of the French military in the Algarve region drew to a sudden close on the 18th of June 1808, after highly irritated Olhão locals rose up and expelled the French garrison.
On 19 June the stalwart citizens of Faro joined the uprising and captured 170 French soldiers along with General Maurin. By June 23rd, all French forces had been kicked out of the region.
To show that there is no lingering resentment, the Union des Français de l'Étranger is preparing a series of concerts, themed dinners on board, exhibitions and conferences at which very important people will be attending, including Portugal’s president.
The Portimão stopover is part of a four-and-a-half-month voyage that began in La Rochelle in February and includes visits to Tangier, Barcelona, Sète, Toulon, Marseille, Port Vendres, Bastia, Portimão, Pasaia and finishing on June 16 in Bordeaux.
The 65 metre three-masted replica of the 'Hermione' was built according to the original plans and using authentic materials. The project started in 1997. It took 17 years to complete and, as sailing ships go, is quite beautiful.
The original 'Hermione' was a Concorde-class frigate of the French Navy and was built in eleven months at Rochefort by shipwright, Henri Chevillard.
In service against the British, on 20 September 1793, Hermione ran aground off Le Croisic and then was wrecked by heavy seas. The subsequent court-martial found that her pilot, Guillaume Guillemin du Conquet, was responsible for her loss; her commanding officer, Captain Martin, was honourably acquitted.
See also: https://tallshipsnetwork.com/events/hermione-visits-portimao/ 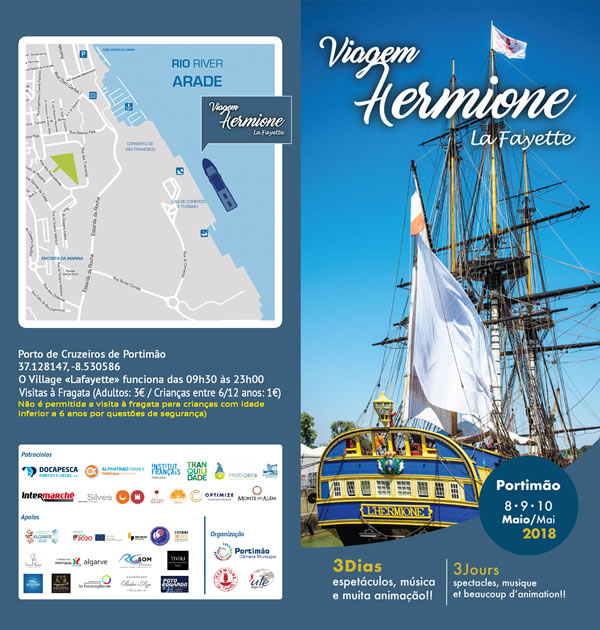