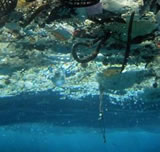 An organisation in Portugal’s Azores is pressing ahead with a joint innovative project aimed at substantially tackling the problem of plastic waste in the archipelago.

A pilot scheme by the Brussels-based NGO ‘Waste Free Oceans’ (WFO), which started in mid-October on São Miguel, the biggest of the Azores islands, is to continue into 2019 and could lead to a much wider, open-ended programme.

The initial project is looking into efficient ways of collecting, recycling and reusing recycled plastics.

Supported by the Azorean Government, ASEMA (Associação Sete Mares dos Açores), IMAR (Instituto do Mar, Universidade dos Açores), OMA (Observatório do Mar dos Açores) and the Thomsea company, the broad objective is to significantly contribute to the prevention and clearance of plastics pollution in the Atlantic Ocean.

The project is being conducted by volunteers in collaboration with the Swiss watch firm Baume, which is planning to use recycled plastic in the creation of a sustainable watch.

On the basis of the findings of the pilot phase, the joint partners intend to apply for longer-term funding to set up a formal ‘Fishing for Litter’ scheme.

The WFO project is using fishing trawlers and new Thomsea technology nets to collect all sorts of floating marine debris.

The project is also reducing shoreline waste by organising beach clean-ups and awareness-raising activities with the help of local organisations.

The WFO is using this first phase to acquire a better understanding of the waste issues on and off the coasts of the archipelago, which lies some 1,500 kilometres (900 miles) west of mainland Portugal.

The group has collected information from various stakeholders about the overall waste in the whole of the Atlantic.

It’s trying to raise awareness both among policy-makers and the public at large by collecting information that documents the impact of marine debris and, at the same time, to build the capacity of the project partners and to support the mobilisation of resources for a follow-up programme that could cover the whole Azores area.

Some of the statistics on global plastic waste have been well publicised, but are none-the-less still shocking:

- Ten million tonnes of plastic end up in the sea every year
- The amount is so great annually that it could circle the globe four times
- One million plastic bottles are sold every minute
- More than 80% of marine litter consists of plastic.

By 2050, there could be more plastic than fish in our oceans, according to the Ellen MacArthur Foundation.

Bad as the problem is in the Atlantic, that’s not the worst affected area. The Mediterranean is massively polluted, and the highest levels of microplastics have been found in the South China Sea.

The European Commission has proposed new rules that target the ten single-use plastic products most often found on Europe's beaches and seas.

These products are the biggest part of the problem. Together they constitute 70% of all marine litter items found on our beaches.

While plastics are a convenient, adaptable, useful and economically valuable material, when not collected they accumulate in our oceans and on our beaches.
Plastic residues have now been found not only in many marine species but also in the human food chain.

The economic impact of plastic litter encompasses the lost economic value in the material as well as the costs of cleaning up and losses for tourism, fisheries and shipping.

The European Commission has proposed a comprehensive set of measures to address this problem. The Single-Use Plastics Directive is an integral part of the wider approach announced this year in the EU’s Plastics Strategy.

It builds on the successful reduction in the use of single-use plastic carrier bags brought about by EU legislation in 2014, and on the newly revised EU waste legislation, which includes targets for the recycling of plastics.

Between now and 2020, an additional €100 million will be devoted to financing EU priority actions, including the development of smarter and more recyclable plastics materials, more efficient recycling processes and the removal of hazardous substances and contaminants from recycled plastics.

The Single-Use Plastics legislation currently being negotiated will be voted by the EU Parliament and is expected to become an EU Directive by May 2019.

Once voted upon, there will be a statutory period of 24 months when Portugal, like all other EU countries, will have to put the Directive into national legislation.

How Portugal and each of the member states meet the new EU rules will be up to themselves.

For sure the new rules will reduce single-use plastics on our supermarket shelves through a range of measures. Some of these items will be banned and substituted with cleaner alternatives so people can still use their favourite products.

Member states will have to implement measures to reduce the use of plastic food containers and drinks cups.

According to an EU Commission statement, the new legislation should offer the clarity and certainty needed for investment and innovation in the Single Market. And it will eliminate uncertainty for business in the face of national measures which some member states have already taken to ban certain single-use plastic items.

Producers will be obliged to help cover the costs of waste management and clean-up, as well as awareness-raising measures for food containers, packets and wrappers such as for crisps and sweets.

The industry will also be given incentives to develop less polluting alternatives for these products.
Implementation of the EU proposals will aim to reduce littering by more than half for the ten single-use plastic items, avoiding environmental damage which would otherwise cost €22 billion by 2030.

It is also expected to avoid the emission of 3.4 million tonnes of CO2 equivalent by 2030.

Massive though the plastics problem is, positive progress is predicted in the Azores, the Portuguese mainland and globally next year, but, like global warming, it’s a problem of such great complexity that it’s going to take many years to master. 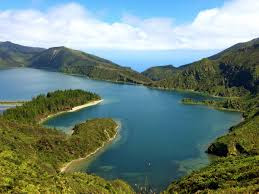 San Miguel Island in the Azores

Len Port worked at the Natural History Museum in London and later the Museum of Western Australia before turning to journalism. He worked for many years as a staff reporter, broadcaster and freelance correspondent covering major events in the Far East, Northern Ireland and South Africa before settling in Portugal where he has edited regional magazines, contributed to national news outlets overseas and written several books.