The tides of the Atlantic Ocean have been observed since ancient times. Medieval monks recorded tidal movements along the coast of England as early as AD 600 and correctly understood the relationship between the tides and the position of the sun and the phases of the moon. The use of modern tidal gauges for continuous data collection and of sophisticated computers for modeling and prediction have improved considerably the accuracy of tide tables and the understanding of the individual constituent forces that determine and affect tidal activity.

The tide of the S-shaped north-south Atlantic basin can be viewed as a single phenomenon that behaves like a large standing wave passing through the basin. The speed, course, dimensions, and behaviour of the Atlantic tide is influenced by a combination of complex factors, which include coastline features, seafloor topography, and wind and current patterns. By far the most prevalent tidal type is semidiurnal, which is characterised by two high and two low tides per tidal day (lasting about 24 hours and 50 minutes). Semidiurnal tides occur along the entire eastern shore of the Atlantic, which of course includes the coast of Portugal and also along most of North and South America. Diurnal tides (one high and one low tide per day) predominate in the Gulf of Mexico and the Caribbean Sea and also are found along the south eastern coast of Brazil and in Tierra del Fuego.

Tidal periods and patterns at various points around the Atlantic basin may be quite distinct. The largest tidal ranges are found in the Bay of Fundy in Canada and The Severn Estuary between England and Wales, where the difference between high and low water can exceed 15 metres. The coasts of Brittany has an average ranges of around 5 metres, Portugal and Spain up to 3 metres and the smallest tidal ranges occur in parts of the Gulf of Mexico and the Caribbean which have ranges of less than 1 metre.

In this situation, which is illustrated in the figure to the right, it can be seen that the earth is drawn towards the moon, the effect of this is that forces on the earth tend to distort it. The body of the Earth is rather rigid, so such distortion effects are small (but finite). However, the fluid in the Earth's oceans is much more easily deformed and this leads to significant tidal effects.

I have illustrated this basic idea with this simple model of a planet (shown to the left) completely covered by an ocean of uniform depth, with negligible friction between the ocean

and the underlying planet. The gravitational attraction of the Moon produces two tidal bulges on opposite sides of the Earth.

Without getting too much into the technical details, there are two bulges because of the differential gravitational forces. The liquid at point A is closer to the Moon and experiences a larger gravitational force than the Earth at point B or the ocean at point C. Because it experiences a larger attraction, it is pulled away from the Earth, toward the Moon, thus producing the bulge on the right side. Loosely, we may think of the bulge on the left side as arising because the Earth is pulled away from the water on that side because the gravitational force exerted by the Moon at point B is larger than that exerted at point C. Then, as our idealized Earth rotates under these bulges, a given point on the surface will experience two high and two low tides for each rotation of the planet. 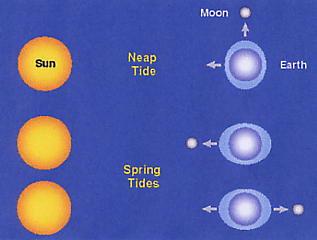 Another complication of a realistic model is that not only the Moon, but other objects in the Solar System influence the Earth's tides. Most of these have a negligible effect on the earth’s tides, but the gravitational force of the Sun does influence our tides to some extent as will be seen from the diagram to the right, which illustrates spring and neap tides.

For example, particularly large tides are experienced in the Earth's oceans when the Sun and the Moon are lined up with the Earth at new and full phases of the Moon. These are called spring tides (the name is not associated with the season of Spring). The amount of effect in Earth's tides is about the same whether the Sun and Moon are lined up on opposite sides of the Earth (full moon) or on the same side (new moon). Conversely, when the Moon is at first quarter or last quarter phase (meaning that it is located at right angles to the Earth-Sun line), the Sun and Moon are pulling against each other and therefore create lower high waters and higher low waters (smaller range therefore); these are called neap tides.

Many people make the mistake of expecting lateral movement of water as a result of tide on the Portuguese coast, but there isn’t any. Those of us who come from Britain, Ireland, France and Holland will be used to tidal streams and allowing for them in our navigation. We have tidal streams in the English Channel, the North Sea and the Irish Sea because they are narrow, funnel-shaped channels that water moves rapidly up and down with the ebb and flood of each tide, often as much as 2 or 3 knots. But here in the Algarve and on the west coast we have the entire Atlantic before us. There are no narrow channels and so the water just changes depth with each tide.