Bomb dragged up in fishing nets off Nazaré

A decades old bomb dragged from the ocean floor by the nets of a Portuguese trawler was taken into harbour, then rapidly back out to sea and detonated in a controlled explosion off Nazaré.

The bomb was hauled aboard the Mar Salgado this morning and lay on the deck as the skipper steered back to harbour, alerting the Maritime Police emergency services that he had a live one on board.

A detachment of Navy divers assessed the situation and decided to take the bomb out to sea and detonate it underwater.

"The bomb was detonated at 16:30. Half an hour later, two reconnaissance dives were made and the bomb’s complete destruction was confirmed," reported the relieved commander of the Port of Nazaré, Paulo Agostinho.

The Mar Salgado’s skipper reported that he had on board a device, apparently the exploding kind, that had come on board in his nets.

The Navy identified the contraption as the type of bomb "that would have been used by WWII aircraft," although it had no identifying markings. If it was an American MK82 type, these were developed in the 1950s and are still in use today.

The casing was between 1.50 metres and 1.60 metres in length, and if it was a MK82 type aircraft bomb, normally would have been packed with an explosive equivalent to 600 lb of TNT.

The team of Navy divers inspected the bomb, took it out to sea, attached an explosive device and sunk it to 23 metres depth before triggering the explosion.

With a nominal weight of 500 lb (227 kg), the MK82 is still in production and is one of the smallest bombs in current service - also one of the most common air-dropped weapons in the world. 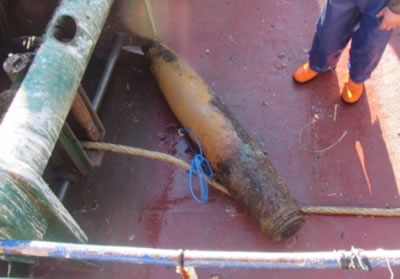 +1 #1 Peter Booker 2017-02-28 08:51
I find that this captain exposed his crew and his boat to danger by taking this bomb into the harbour. He should have thrown it back overboard.

But the fact that he picked it up at all shows that his nets were dragging the sea floor. This type of "fishing" alters the balance of the environment of the sea bed and is ultimately destructive to the environment. It should be banned.
Refresh comments list