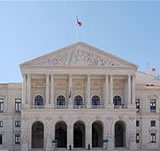 The President of the Assembly of the Republic, Ferro Rodrigues, is setting up a second parliamentary commission of inquiry into the goings-on at Caixa Geral de Depósitos.

A request was handed in by the former coalition parties (PSD and CDS-PP) that calls for a new committee to be formed to assess the Government's performance in the appointment and subsequent exit of the former head of Caixa Geral, António Domingues.

The current committee of inquiry will continue, despite losing its chairman who resigned in exasperation, but will remain restricted to looking at Caixa Geral’s lending decisions since 2000, the bank’s inept management and the bank’s application for recapitalisation.

The new commission will look specifically into the events surrounding Domingues’ brief tenure as the head of the State-owned bank, the involvement of the Minister of Finance, Mário Centeno, in appointing Domingues on a much increased salary, bonus scheme and an exemption from submitting his income and asset statements.

Ferro Rodrigues’ office confirmed that the President of the Assembly decided on Monday that a new commission should be established and that details will be posted in the Diário da Assembleia da República.

On Wednesday, the composition of the new committee should be decided and then it can start without delay.

The new commission will be able to demand records of correspondence and communication between Domingues and Centeno - who has managed to hold on to his job only due to the support of the Prime Minister who does not want to lose a key minister just as the economy is picking up.

The new commission will not be able to ignore aspects of its remit as a ‘no changes’ clause has been written into to the brief.

The laws covering parliamentary inquiries allow two committees to operate simultaneously in the same area, provided they have different objectives. The current one focusing on the management and lending at Caixa Geral since 2000 should report by the end of March with the public expecting details of corrupt lending, backhanders and political pay-offs.