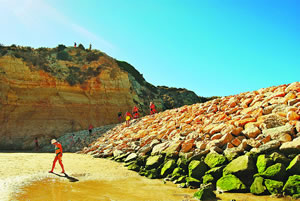 The Algarve continues to lead the country in the number of Blue Flag beaches, according to the 2017 list.

With one beach in, and one beach out in this year’s line up, both in Lagoa, the region sports 86 beaches that are up to internationally recognised standards.

As usual, Albufeira has the most awarded beaches, with 22, followed by Vila do Bispo, with 11, and Loulé, with 10 (see complete list below).

Four marinas have been awarded the standard, at Albufeira, Lagos, Portimão and Vilamoura.

Portugal and her autonomous zones have garnered 320 Blue Flag awards as befitting a country whose tourism exports continue to prop up other ailing sectors. The number is six up on 2016 with 292 coastal beaches and 28 riverside venues.

José Archer, president of the Blue Flag Association of Europe (ABAE), announced the tally during a presentation in Lisbon which showed that the Algarve leads the field.

The list is dynamic with 14 new beaches, five re-entries and 13 beaches dropped.

The first Portuguese mayor to react to the publication of the list was António Pina, the mayor of Olhão.

"As a mayor and as an Olhanense, I could not help but be extremely pleased to see these flags once again on all the beaches of the county. This is the perfect proof of the consistent work that has been done in terms of preserving the environmental quality of our bathing areas. This is and will continue to be a constant priority for this executive in the years to come."

The Olhão mayor did not of course refer to the raw sewage outfalls that continue to flow under his city into the Ria Formosa as the areas affected by this pollution are a long way from the Blue Flag beaches on the island of Armona and further east along the coast at Fuseta.

Surprisingly, Dona Ana beach in the Lagos area (pictured above) is on the list, despite environmentalists slamming the face-changing work carried out by the regional Environment Agency which for many, changed the much-loved beach from the 'best beach in the world'  (Conde Nast, 2013) into a surgically enhanced fake with local environmental organisation Quercus, in July 2015, calling for the Gold Award to be withdrawn.

As for Portugal’s place within its European competition, 55% of the bathing beaches have the Blue Flag for this year, placing Portugal in 1st place for Europe, despite being fifth in the total number of award-winning beaches, behind Spain (578), Greece (486), France (390) and Italy (342).

List of Beaches awarded with the Blue Flag in 2017