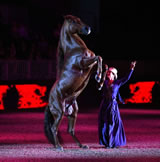 Fatacil, now under the financial spotlight after Lagoa council closed the operating company Fatasul after years of inexplicable losses and took the finances in-house, has announced a key sponsor for the 2017 show running from 18th to 27th of August.

The Crédit Agrícola bank again is to support the largest Crafts, Tourism, Agriculture, Commerce and Industry fair in the south to be held, as usual, at the Parque Municipal de Feiras e Exposições de Lagoa.

The renewal of this sponsorship is in line with the bank's philosophy: to be alongside the best that is produced in Portugal.

As part of the sponsorship package, the bank is taking a stand at the fair with August 26th (Ed's birthday) now designated as Crédit Agricóla day, enabling staff to hand out goodies to visitors and existing clients.

This sponsorship aims to strengthen the Crédito Agrícola within its traditional customer base in local communities that are involved in the agricultural and industrial sectors, mainly in the south of the country.

Over the years, the Bank has focused heavily on developing within Portugal’s regions as a way of boosting local development and helping the success of the local and national economies. Its mutual status has helped the bank avoid many of the more exhuberant activities its competitors have displayed, remaining solvent and not needing State-sponsored bailouts.  Crédito Agrícola is Portugal's only national cooperative bank and has a network of 670 branches in Portugal.

Fatacil is in its 38th year and has one of the best musical rosters during the summer season.

This year will not disappoint, with the following programme:

For horse-lovers, there is an equestrian programme with a début appearance by Clémence Faivre, the French rider and horse breeder at her Lusitano Purebred Stud Farm.

Born in the Gouvieux region, north of Paris, Clémence Faivre had her first horse at age 12.

Her passion for horses and cinema led her to attend Cours Florent, a theatre school based in Paris, where she learned the art of performing and met Mário Luraschi, an Italian specialist in the art of riding horses in movies.

In 2007, already established in Andalusia, she specialised in dressage, working directly with Rafael Soto, an Olympic medalist, later participating in several shows with Don Álvaro Domecq, the founder of the Royal Andalusian School of Equestrian Art.

Three years later, she was working with her horse Gotan, and created a show that has enthralled thousands. In 2015 she fulfilled another dream and established herself as a breeder of the Lusitano horse at her stud farm in Sanlucar de Barrameda, Cadiz.

Clémence Faivre will be performing ‘Gotan’ at Fatacil on the 23, 26 and 27th August. 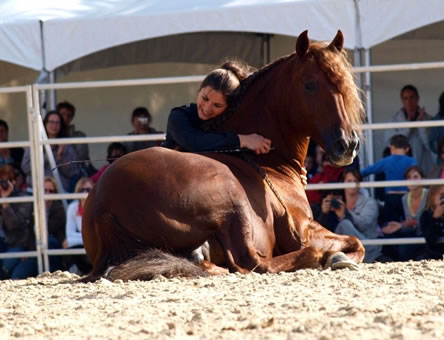