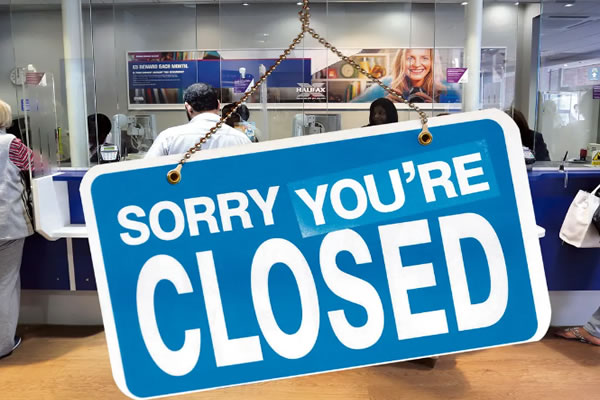 Many of the big British banks have written to expats to say that unless they can prove they are resident in UK they will stop serving them when the withdrawal agreement ends on December 31st this year, leading to issues for many.

The Times wrote yesterday "Without a continuation of crucial pan-European banking rules, known as passporting, it will become illegal for UK banks to provide for British customers in the EU without applying for new banking licences.
As each of the 27 member states has a hotchpotch of different rules, it is a bureaucratic nightmare for institutions, and some are deciding simply to ditch certain countries."

One British bank states: “In some cases, continuing to serve customers would be incredibly complex, extremely expensive and very time-consuming, and simply would not make economic sense.”

Not all banks have taken the same decisions, but over recent weeks those that have decided which countries to abandon have been writing to customers living outside the UK, in countries where the regulatory demands are considered to be too costly, informing them that their accounts will be closed.

Britain’s biggest banking group, Lloyd's, began writing to those customers affected in August, to inform that their bank accounts would be shut on December 31st 2020. This will also apply to customers of Halifax and Bank of Scotland, which are owned by the Lloyd's group. Coutts bank, which serves some of the UK’s richest and most affluent people also confirmed that customers based in the EU will no longer be served.

Currently, NatWest and Santander say they have no plans to close accounts.

If any readers have received letters from any banks on this topic, please email pp@montecv.net. I'm keeping a tally for ECREU. Thanks.

+1 #10 Margaridaana 2020-09-28 13:23
To those who red thumbed me, please refer to pensions.gov.uk living abroad or pensions advisory service.org.uk.
If any one knows better, please elucidate.
-2 #9 Peter Booker 2020-09-28 12:33
My comment does not question the fact of Brexit, Chip, regrettable though it is. The Prime Minister promised that Brexit is "oven-ready", which I assume to mean that all the arrangements are already in hand. Typical moonshine from a man who would make a far better gameshow host than Prime Minister.
0 #8 Chip 2020-09-28 11:32
Quoting Peter Booker:

Yet another triumph for the oven-ready Brexit, as promised by the idiot-in-chief.

The UK has left Peter.

montecv.net. I'm keeping a tally for ECREU. Thanks
+5 #3 David 2020-09-22 22:19
British banks are so wealthy, so quantitively-eased (susidised) and so bailed out by the taxpayer, they could afford literally anything they want.
+3 #2 Kevin 2020-09-22 20:21
I checked with my bank Lloyds today, my account is based in the Isle of Man with Lloyds International, they are not closing accounts because they are not "UK" based, I guess the same in the Channel Islands, so expats with accounts not based in mainland UK would appear to be ok, those with accounts in UK should maybe consider transferring to I.O.M or C.I maybe
0 #1 alentejoangel 2020-09-22 13:34
This is a potential solution for those needing a UK mailing address, and are unable to use family/friends which can be troublesome for both parties.
https://www.expost.uk
Extract from https://www.expost.uk/legal
"banks & credit cards
If you already have a UK bank account, you need simply change your mailing or correspondence address. Most banks and card issuers offer such a facility in their website and will accept your new address without question. For new accounts; by all means tell the bank that you do not have a fixed UK residence (perhaps because you are abroad, or constantly travelling?) but do have a permanent mailing address. They can then use other means to check your identity and credit worthiness."

Entering the bonus code PORTO will add an extra month to your annual account free of charge.