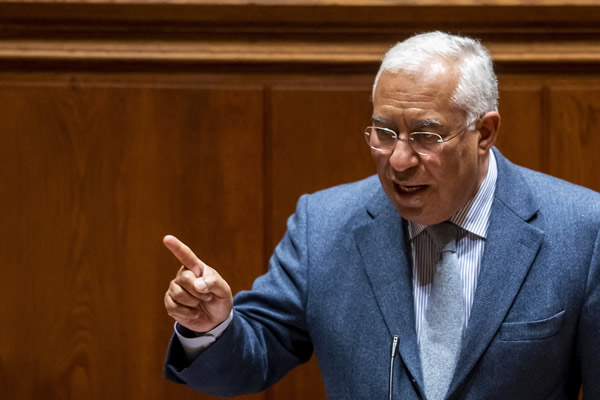 The Portuguese Prime Minister, António Costa has today announced measures to combat Covid-19 within the framework of the current decree of state of emergency, which will be effective until January 7, including the Christmas and New Year periods.

On Friday, with the favourable votes of the PS, PSD the Assembly of the Republic approved the renewal of the state of emergency - a ruling opposed by the PCP, ENP, Chega and Liberal Initiative, and with abstentions from Bloco de Esquerda, PAN, and CDS.

This presidential decree that renews the state of emergency until December 23, with a reference in the introduction to its "foreseeable" extension until January 7, has content identical to what is already in force, namely maintaining the rules that allow restrictive measures to contain Covid-19 by groups of municipalities, including a ban on circulation in certain periods or days of the week.

In the last public speech, António Costa already admitted that the Government may relax the regime of restrictions to be applied during the Christmas period, but not over the New Year.

In view of this perspective, the President of the Republic, Marcelo Rebelo de Sousa, in his communication to the country made on Friday night, in which he announced the renewal of the state of emergency until December 23, said he hoped that the "possible exceptions" to the framework of restrictions to contain the Covid-19 over the festive period "will be well understood and well lived" and do not cause "a lack of control later, at a very high cost".

"The idea will be, therefore, not to jeopardize the Christmas spirit, but to demonstrate increased respect for the rules that can prevent generalized family contagions", said Marcelo Rebelo de Sousa.

Both the President of the Republic and the Prime Minister have registered less negative developments in terms of new cases of Covid-19 since the first state of emergency was declared in early November.

At the end of the last meeting at Infarmed, in Lisbon, with the presence of the President of the Republic, party representatives, and after a series of interventions by experts, António Costa concluded that "it was clear that the measures adopted have been producing results ", but stressed that" it is not yet possible to alleviate them", warning that the beginning of January is a period of risk in terms of an eventual increase of contagions.

"As everyone anticipates, necessarily at the beginning of January and February, we will have increased risks, whether due to temperature, or due to the Christmas season, or due to the confluence with other diseases, such as the flu. Therefore, we are on the right path, but it is necessary continue this path so that we can control and consolidate this situation", he said.

On the same occasion, the executive leader defended the existence of a time frame until January 7 for the duration of the measures to combat Covid-19, including the Christmas and New Year periods.

At this point, António Costa noted that, technically, from a legal point of view, the state of emergency is only valid for 15 days.

"Every 15 days a new initiative by the President of the Republic, a new opinion from the Government and a new authorization from the Assembly of the Republic are required, but it is essential for people to know how they can organize themselves over the festive season and up to07 January. Technically this situation has been resolved ", justified the Prime Minister.

The "less intense restrictions" are as follows:

It will be possible to move between counties between 23 and 26 December, but on New Year's Eve there are restrictions on travel.

At Christmas the following is allowed:

The Prime Minister said that the exceptions for the Christmas and New Year period will be evaluated on December 18 , "to confirm with the information of the next 15 days that the trend of improvement of the pandemic situation is confirmed and that we do not need pull the emergency brake to avoid aggravating the pandemic at Christmas time ".

For Christmas and New Year, António Costa asks the Portuguese to avoid meetings with many people, without a mask and in closed, small and little airy spaces, to prevent new cases of Covid-19.

"We will maintain the restrictions in the subsequent period in order to ensure that we have a significant level of containment for now that allows us to arrive at Christmas with the least possible infection, but after Christmas and New Year a new phase of containment in order to contribute by January we are in the best conditions to face a month of very high risk ", declared António Costa at the end of the Council of Ministers.
The Prime Minister said that the exceptions for the Christmas and New Year period will be evaluated on December 18, "to confirm with the information of the next 15 days that the trend of improvement of the pandemic situation is confirmed and that we do not need pull the emergency brake to avoid aggravating the pandemic at Christmas time ".

Have come out, and EXPOSED THIS F***
Scam.

The pandemic is scam! Fake! So is the phony vaccine!

Read on, just out now on rt.

BBC, cnn, won’t tell o, they are part the problem, there all in on it!

Are You waking up yet?