Covid-19: Portugal has already received more than 140 thousand doses of the vaccine 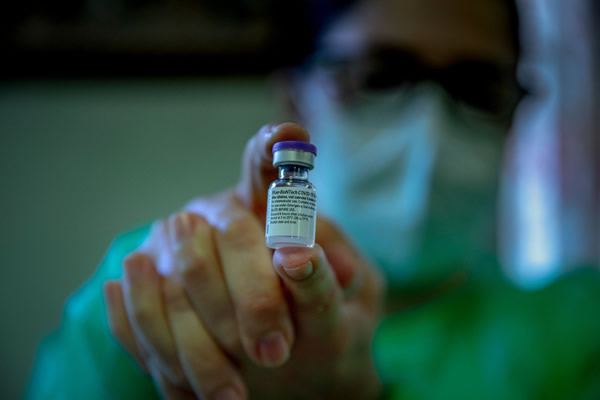 Portugal has already received more than 140 thousand doses of the vaccine against Covid-19, almost half of which has already been distributed and, of these, 32 thousand have already been administered, revealed the Minister of Health, Marta Temido today.

The Minister of Health spoke to journalists at the beginning of the vaccination session of users of the Integrated Continuous Care Unit of Santa Casa da Misericórdia de Mora, in the district of Évora. "Of the approximately 140,400 doses of vaccines" that Portugal received, "more than 66,700 doses have already been distributed" and, by 17:30 on Tuesday, "more than 32 thousand doses had already been administered", she said.

Asked about the arrival of new vaccine shipments and possible delays, the minister said that health authorities are "always adapting" and added that next week more vaccines against Covid-19 will arrive in Portugal.

"A shipment arrived this Monday, 79,950, and we have three more shipments in the next few weeks of January ", she stressed.

Marta Temido pointed out that Portugal maintains the strategy of administering the second dose of the vaccine from Pfizer and BioNTech “21 days after” the first inoculation.

"Of the 140,400 doses that the country received, we have already distributed around 66,700", which "means that we have enough not only for a second dose, but also a small amount of reserve for unforeseen situations", she said.

According to the minister, the first phase of vaccination, which encompasses health professionals and essential services, users and employees of nursing homes and care units, and patients over 50 years at high risk due to existing medical conditions, is expected to continue “until at the end of the first quarter of 2021 ”.

"In the second phase, we will move on to other groups. This decision was made for technical reasons and because we are still working with a number of vaccines that is still relatively limited," she stressed.

Portugal accounts for at least 7,286 deaths associated with Covid-19 in 436,579 confirmed cases of infection, according to the latest bulletin from the Directorate-General for Health (DGS).