The rescue bus that left Braga, Portugal last Thursday for Wroclaw in Poland, arrived back this morning, carrying 16 families of Ukrainian refugees, 44 people in total, 23 of which are children.

For now, they will stay in a hotel in the city. According to the head of the Civil Protection of Braga "We realised who came with us were those people who were unable to bring anything with them, the only thing they bring in their luggage is some food. Many didn't even bring clothes". 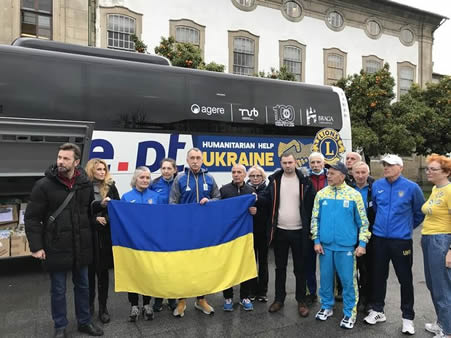 Last Thursday, the bus, loaded with food, clothing,medicines, a doctor, a nurse, a Ukrainian based in the Braga region as an interpreter, with a member of the Civil Protection following.
It was 2,850 kilometres each way, in a round trip that took about 80 hours and was driven by four drivers, to make the journey "practically non-stop".
In the coming days, the 16 families will be sent also to other parts of the country.

"We have flagged some families of people who were transported here, who live here in Portugal and are in, but also some living in other places outside. Once we have the formal process over, we will direct and accompany them to these destinations, from the Algarve to Lisbon. There are others that will be integrated in Braga, in the multiple initiatives that were made available, either by individuals or companies," said the head of the Civil Protection of Braga.

About 800 Ukrainians currently live in the city of Braga, which, according to the mayor, will “certainly” facilitate the integration of refugees who abandoned their country, because of the Russian invasion.

A second rescue bus also arrived this morning in Lisbon, carrying a further 43 refugees and their animals from countries bordering Ukraine.

The bus reached Warsaw on March 5th, and brought a total of 14 children, 29 adults/elderly and 10 animals (dogs and cats) back to safety.

This morning, March 7th, on their arrival, as the refugees disembarked at the Lisbon Municipal Police Pavilion, to a specifically set up reception area for refugees from Ukraine, an IRA member commented “Children on board painted a Ukrainian flag on paper and offered it to IRA members. In response, we took the microphone from the bus and, with our cell phone, played the national anthem of Ukraine. They cried, they applauded, they thanked us."