Today, 25th of November, International Day for the Elimination of Violence against Women, the GNR is promoting a nationwide campaign “Submissão Não É Option”,  with various actions to raise awareness in society as a whole. 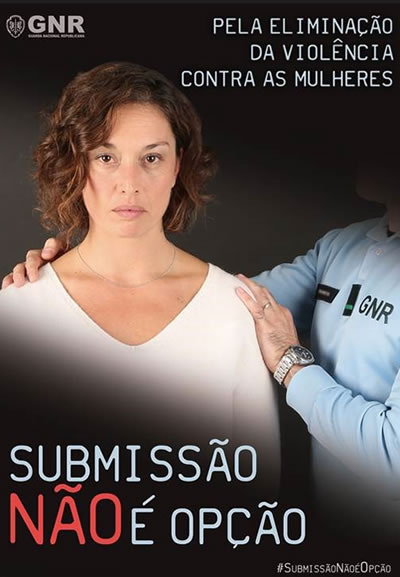 The launch of the #SubmissãoNãoéOpção campaign involves the dissemination of a video and posters distributed nationwide, aimed at preventing violent behaviour against women, given that violence is disguised in different ways: physical, psychological, sexual, moral, among others.

The aim is to sensitize the community in general to the awareness of gender equality and the promotion of a culture of non-violence, as well as to reach the different target audiences, raising awareness to the phenomenon of violence against women, especially domestic violence, violence in dating, rape and other sexual assaults.

The prevention and investigation of the crime of domestic violence are priorities of the current criminal policy and are a priority for the GNR. They have been focusing on specific training actions for  staff, so that they can be increasingly better prepared to participate, manage, handle and monitor this type of situation, further improving its network of care for victims.

The GNR has 517 soldiers with specific training for vulnerable victims and research centers to support specific victims for more complex crimes, involving all types of vulnerable victims, including children, women and the elderly.

Violence against women and domestic violence are among the most serious forms of discrimination against women based on their gender, reflecting persistent gender stereotypes and unequal power relations. The impact of this crime is not limited to the victims directly involved, it also affects families and society as a whole.

Domestic violence is a public crime and reporting it is a collective responsibility. If you need help or are aware of any situation of domestic violence, get involved:

• On the Queixa Eletrónica Portal, queixaselectronicas.mai.gov.pt;
• By telephone, through the emergency telephone number: 112;
• At the GNR Post closest to your area of ​​residence. Find you nearest here www.gnr.pt/contactos.aspx;
• In the App MAI112 available and intended exclusively for deaf citizens, at http://www.112.pt/Paginas/Home.aspx;
• In the SMS Segurança application, an emergency texting service aimed at deaf people at www.gnr.pt/MVC_GNR/Home/SmsSeguranca.