"It was a nightmare. For seven months, I did not know if my daughter was alive or dead."

Candice Gannon was giving evidence from Ireland via a video-link to Faro court on Wednesday and told the panel of judges of the psychological effects her daughter’s kidnap had on her during the months Ellie was hidden by her father, Filipe Silva.

In September 2012, when Giselle “Ellie” Kelly Silva was seven-years-old, her father Filipe Silva failed to return her after a family holiday period, taking her to Oporto where she had to use a false name and wear a disguise when leaving the apartment where she was being held.

Ellie’s absence eventually was taken seriously by the authorities in Faro and a hunt for the kidnapped girl was mounted, leading seven months later to Oporto where Ellie was found to be living with her father in the apartment owned by a friend.

Ellie finally was handed over to the authorities by Filpe Silva’s paternal grandmother and Silva was detained by the Judicial Police.

In the first session of Silva's trial for kidnap in October this year, held after three postponements, Filipe Silva’s former partner, who claimed that at the time she was living with the accused, said that in the days before the date set for Ellie’s return to Ireland, the girl had cried and asked her father not to take her back to her mother, adding that Silva had been "desperate" not knowing what to do, and acted "instinctively" and had not planned to flee with his daughter.

In the second session of Filipe Silva’s trial, Ellie, her mother and step-father gave evidence via a video-link from Ireland, where the family now lives.

Candice Gannon explained to the group of judges that her daughter had been "deeply marked" during the period in which she was held against her and the family court’s wishes and that she continues with daily therapy.

Ellie told the court that she had been reluctant to go with her father to Oporto, "I wanted to go back to my mother in Ireland. I never tried to contact my mother because I was afraid of my father's reaction," adding that she was "disguised with a cap, a jacket and sunglasses." "I felt sad, as if I was stuck."

Ellie told the court that she never left the flat except to go to school, that she was forced to use the false name ‘Pipinha’, had missed her mother but was too afraid to mention her because Silva would get very angry, had sat in a study hall on her own with a private teacher each day, went out only once, had to wear a disguise and was allowed no contact with other children.

Silva, a Vilamoura based businessman, is due to give evidence at the final hearing in two weeks time - the parties then will wait for the judges’ verdict after a summing up sometime in January, 2016.

Filipe Silva failed to attend the court hearing this week, claiming he had to go to hospital having suffered an injury. 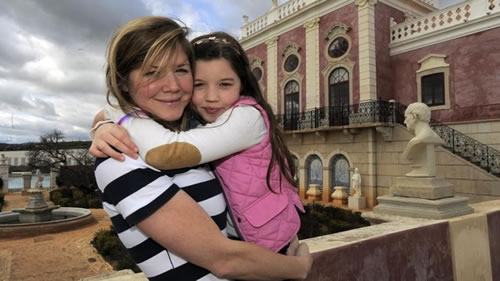 -1 #4 OLeary 2015-12-05 13:52
What is so desperately sad for the European Union as a whole is that Silva will not have had to 'sound out' two dozen or more Portuguese lawyers to find a bent one. His regular one would do nicely ! Can anyone imagine for an instant so many Portuguese lawyers warning Silva :

"Stop there, Snr. Silva. I must warn you that what you are proposing to do is illegal and in offering me money, a registered lawyer, to help you carry it out - is also not just illegal but, as a protected profession - notifiable. I will be obliged to notify the authorities if you continue to discuss this with me. The door is where you last used it - please close it on leaving"
0 #3 Steve.O 2015-12-05 09:06
Why is this practicing member of the Portuguese Bar Association not on trial and why is the Albufeira Magistrate that was caught red handed assisting Silva to evade the police not on trial?

Getting inside a Portuguese head is next to impossible for a non-Portuguese but could any of this relate to the Portuguese teaching about 'British' colonialism in Africa in the 1800's? That Ireland was still then part of the British Empire so 'fair game' today to be messed about.

OK bungs would have been changing hands - but why did no one on the periphery and knowing something odd was going on; that an unhappy, very young foreign girl was crying uncontrollably in an unrelated persons apartment - speak up ? Are they all that damaged?
+2 #2 Mary Kelly 2015-12-04 23:37
Ellie was hidden for 7 months in an apartment in Porto belonging to Mr. Alfonso Marques (single). Filipe Silva's lawyer, Dr. Nuno Remedios, lived in the same apartment building and visited Ellie regularly while she was kidnapped. She was told to call him "Tio Nuno" and he was one of her very few visitors.

Why is this practicing member of the Portuguese Bar Association not on trial and why is the Albufeira Magistrate that was caught red handed assisting Silva to evade the police not on trial?

During the time that Ellie was kidnapped, Silva paid Nuno Remedios to file dozens of groundless civil and criminal complaints into the Faro civil and criminal courts as part of their strategy to cause maximum pain and suffering to Ellie's mother, while she was desperately doing everything she could to try to find her daughter. There is no monetary amount that can compensate for this for this level of psychological stress.

Will justice be done in this case as it was in he case of Alice Evangalista. Or, will Silva's friends in the police and the local judiciary predictably let him away with it and in doing so make an international laughing stock out of the Portuguese justice system.
0 #1 Malcolm.H 2015-12-04 09:43
There cannot be many of us northerners impressed with the hiding of the girl in the lawyers apartment block. And the court officials insisting on knowing where the police would be searching - the police mysteriously obliging - and then warning this guy to hide Ellie.

But it reminds us that, if the Portuguese Police ever do find someone responsible for a crime and prosecute them (don't ever hold your breath) - there is a claim for psychological stress you can lodge with the court. On any assets the 'criminal' has.

Not having had this explained to us at the time meant we did not ask for these damages for psychological stress when the police stumbled on then prosecuted the people they were accusing of a burglary of our place. And about 200 other burglaries. So remember this and make your claim !
Refresh comments list