Victory for Algarve environmentalists as suspect drilling is suspended

A victory in one battle at least as environmental pressure groups have managed to have the suspect drilling work halted at Perdigão, Aljezur.

The Portuguese Environment Agency issued the suspension today after a site visit in Perdigão thus calling a halt to the activities of Domus Verde Imobiliarios Empreendimentos, owned by local businessman Sousa Cintra (pictured) whose Portufuel company has the oil and gas drilling rights over much of the Algarve’s land.

The Agency’s boss, Sebastião Teixeira, visited the rural site with the Aljezur mayor José Amarelinho, and later attended a meeting at the Lagos GNR headquarters to compare notes with officials of the General Inspectorate of Agriculture, Sea, Environment and Spatial Planning, and the GNR environmental division.

The drilling license issued to Domus Verde was for water exploration, ostensibly to irrigate farmland and started last December since which there has been activity that appeared to local environmental groups as being unrelated to water exploration.

Work recently had started on a second borehole licensed to a maximum of 500 metres but as the first borehole already had produced water, the officials inspecting the site today, concluded that there was little point in drilling the second borehole as water already had been found in sufficient predicted quantity to irrigate the land specified.

The Aljezur mayor cut through the confusion and is well aware that the site is being used as a platform to drill deep for core samples in the search for hydrocarbon deposits for which no licence has been applied for.

"If the argument of the company is that they are looking for water for a hypothetical farm, that goal has been achieved and therefore it has no excuse for further drilling," said Amarelinho, talking to Sul Informação this afternoon.

It did not help the company’s case that it was drilling for water, that a geologist contracted by Portufuel was found to be at the site when the inspectors arrived.

Locals and pressure groups including PALP and ASMAA made a series of complaints that the drilling had been going on for months, that adjacent boreholes now had poor quality, opaque water, that chemicals had been stored in open pits on the site and foam had been running across the land into a nearby stream which is connected to the local river system.

Social media has been used to good effects with the drilling site recently under surveillance by activists reporting on chemical smells and the clearly illicit activities authorised by Sousa Cintra whose recent letter of complaint about activists that was sent to the mayor of Vila do Bispo, remains unanswered.

As for the seven hectares of farmland that needed irrigation, nobody from Domus Verde yet has said what crops are planned that require water from two boreholes and an investment in a drilling rig and team for four months - this is because there is no plan to plant anything, irrigate anything or use the area as a farm.

It reamins to be seen what fines will be applied for the environmental damage that has been caused but if anyone was only mildly concerned that Sousa Cintra's activities could harm the Algarve, they might wish to reconsider.

How Sousa Cintra's Portfuel company managed to obtain the rights for 40 years to all oil and gas deposits below 300,000 hectares of the Algarve is a question to which we may never know the answer. 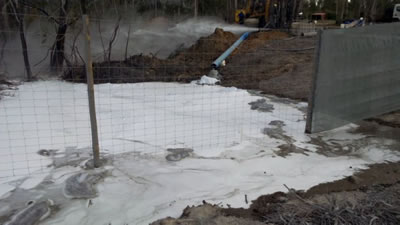 As often seen - the Portugal site of expatfocus.com regularly has a 'Portuguese origin' Mason appealing for more British to join the British franchised Algarve Lodges to bring common-sense old-style Masonry to their proceedings. Or lose the franchise. As distinct to the far more numerous Portuguese Lodges who have everyone from President Rebelo de Sousa and PM Antonio Costa downwards in their membership. Perhaps these Algarve Masons can fill in our knowledge of drilling in the Algarve ?

Then ASMAA and PALP will know who they are up against - who the real enemy are !
Refresh comments list