The Secretary of State for the Environment finally has stated the real reason for his insistance that the demolition of properties in settlements on Culatra, Farol and Hanagres Islands situated in the Ria Formosa’s Maritime Public Domain must and will go ahead.

Far from being a matter of health and safety, Paulo Lemos said yesterday that the "land belongs to us all" and the buildings are 'illegal.'

Islanders say that the properties selected are not at risk from flooding as they are not beachfront hence will not be swamped by high seas and many are already registered at the council.

Many planning regulations are interpreted by local councils and Faro councillors last week unanimously voted to support the island property owners against the demolition orders, part of a +€2 million government spend to flatten people’s private property and make the island prettier to look at.

The target is to remove 808 homes located on the islands but Faro council wants to see houses saved and does not see a problem with those fishermen who live there staying put.

Until now the reason given for the order under the Polis programme was that it would be inconvenient to rescue people from these properties should there be flooding due to foul weather mixed with high tides.

“We do not want scenes of destruction by the sea, as witnessed in Fuseta some years ago, repeated elsewhere, there are people and assets to be protected in places where there should not be people or assets," said environment minister, Jorge Moreira da Silva in June this year.

Unaffected adjacent properties to the ones set to be demolished are allowed to remain and the safety argument was long thought of as flawed, see through and a feeble attempt to mask the social engineering being carried out to remove people from island properties across the Ria Formosa islands to make them look prettier.

In just such a way Isla Deserta was cleared of houses some years ago, their bulldozed remains still present an ugly welcome, yet a lucrative restaurant and beach concession sprung up in their place in a case of people making way for money.

This model is being cited by residents on other of the islands who are preparing for eviction under the Polis programme, and now are fearful of having to live on the streets of Tavira, Olhao or Faro. They fear they are being removed so that big money can move in a build luxury homes and maybe restaurants.

Paulo Lemos was the Secretary of State who was happy to sign away 350 hectares of land for development adjacent to the Salgados lagoon area near Armaçao de Pêra, Silves for the Praia Grande project.

This controversial scheme was authorised by a government keen to recoup some of the €2.7 billion it wasted on bailing out BPN, before selling it to the Angolans for €40 million. An offshoot of the corrupt BPN empire contains property developer Finalgarve.

Had Lemos blocked the development of the Salgados area on environmental grounds, Finalgarve’s asset would have been rendered almost worthless. His signing off of the Environmental Impact Assessment has been his biggest betrayal so far of the ‘Environment’ part of his job title.

Lemos says that Faro’s alliance with the home owners on Faro Island is flawed and the demolitions will go ahead.

As for the building of a bridge to Faro Island, Lemos says Faro council is ages late in applying for funds under Polis, and as for dredging, forget it as Polis is being wound up next December and thus EU funding for these projects cannot be applied for and agreed in time.

These delays do not seem to affect the demolition of island homes and Lemos has no trouble in finding the necessary money to ensure the job is done before the December 2015 deadline for work under the Polis programme.

Paulo ‘Just following orders’ Lemos said that the demolitions "have been planned for some time under the Polis programme and Plano de Ordenamento da Orla Costeira," two instruments that oblige the administration to "fulfill the law.”

This ‘just doing my job’ excuse is as laughable as the “fulfilling the law” one. The law in the hands of ministers has a habit of being used only when it suits their political purpose and doing his job normally would involve a dialogue with those about to be made homeless to develop alternative accommodation on the island in such area that Lemos does find acceptable.

"They are second homes, vacation homes in the Maritime Public Domain, or on land that belongs to us all, and are illegal occupations. I understand the position of the Council, but do not agree with it, because we think legality must be restored in this area. We cannot let the public domain be occupied by those whoever it pleases," argued Lemos, without a hint of compassion for those he proposes to displace or a plan for their wellbeing - the ‘us and them’ of Portugal thrown into sharp relief.

This second home statement is not truthful. In fact it is a lie as the 30 shellfishermen on Rato island have no other homes and soon are to be wiped from history with zero provision made for their welfare or future housing needs. These are poor people who are inconvenient to the state which feels it necessary to lie about them as if they do not exist.

There are notable exceptions to the Lemos masterplan where houses owned by the clearly well-heeled are strangely exempt yet lie in the Dominio Publico Maritimo na Ria Formosa area that he wants cleared.

A picture of a property on Armona is posted at the end of the article. This appeared on the Olhao Livre Facebook page which questions how this type of house is OK and houses owned by the poor are to be bulldozed?

The house pictured is not a first home was developed by Ketlan SA of Almancil and was purchased and developed after the prvious owned was not even allowed to build a wall as 'the house is up for demoltion.'

The previous wooden house indeed was demolished, but only to make way for this concrete and bloc structure, materials that are not allowed to be used on the islands. The view from the islanders that the rich get nice second homes and the poor get shafted seem broadly in line with reality with several examples on offer.

The Secretary of State’s stance on the Faro bridge project is that the work has not been done "not because the administration does not want to do it, but because at this stage it is no longer possible to do the work on time. The bridge can only be built with the financing available right now, and we are talking of finance under the previous Community Framework which requires that the work be completed by December 2015. It is now impossible to launch a contest, award the work, obtain approval of the Court of Auditors and complete the work by December 2015."

This is a more credible response as Faro council indeed have dithered and procrastinated over this bridge for years.

Former Faro mayor Macário Correia managed to look busy and achieve nothing, one of his more endearing characteristics, to progress the bridge idea, realising that whatever he did would lose him popularity, preferring instead to spend €4 million on Faro’s Riverside Park which is not yet complete and already proving to be little used.

The current mayor of Faro Rogério Bacalhau always appeared confused by the Faro Island bridge plan, perhaps because he knew that it could never be built under the Polis programme if he continued to potter around and delay things long enough - this he seems to have achieved with flying colours.

Asked about the loss of the opportunity to obtain community funding under the Polis programme, Paulo Lemos said that "when they call for applications, Faro Câmara can compete in the next Community Framework, it then can apply directly for funding for this work."

Faro council has mishandled the two Polis projects that it could have benefited from; a new bridge to Faro Island and dredging. Its executive is stuck with the one project that is being imposed from on high, demolition, which now the entire chamber is resisting by supporting the islanders.

The Secretary of State sees Faro’s attempts of getting its act together and submitting a plan for a new bridge as amateur, late and still not done. He is able to sidestep the dredging problem as everyone else in politics has done – the work has not been done due to funding and now time has run out to reapply.

The first applications for urgently needed dredging were in 1999 and still not a dredger in sight despite ministerial promises and assurances of ‘soon come.’

By imposing the nastier aspects of Polis, which is seen locally as an instrument of oppression rather than as a tool to help enhance the Ria Formosa area, while following the inaction regarding the Faro Island bridge and the dredging issue, Lemos at least has defined his position and now will be digging in for a fight.

The authorised demolition orders, with skilful use of the legal system, could be kicked into the long grass surrounding the next election, after which time this Secretary of State for the Environment’s CV will read that he was more keen on making fishermen homeless than protecting the environment.

Also, that Lemos authorised a massive tourist complex with golf courses at Salgados, an important natural area recognised worldwide as a bird sanctuary and one which attracted 32,000 signatories to what turned out to be the largest environmental protest the country has ever seen.

Armona and other strange anomalies...

Below is a property on Armona, #176,  that somehow has escaped the purge. Nearby poorer quality houses have not and will be demolished next year. Their owners must leave by November 28th of be charged for the demolition of their own property. 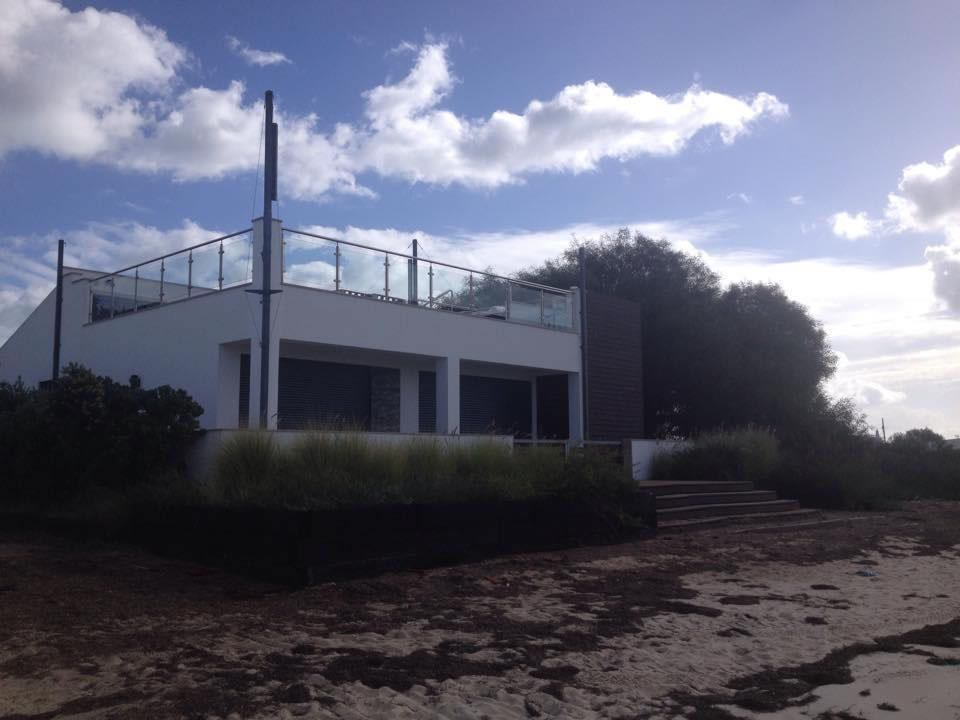 Plenty of references to economy of the Ria, shellfishing, fishing, erosion, tonnage, sustainability etc etc in which dredging plays a part. The councils and fishing organisations using the Ria have been applying for dredging to open up the access routes, increase the flow of sea water and recover shellfish grounds etc, whatever dredging is good for. Polis seemed a good organisation to apply to. The Minister for the Economy this year promised dredging, The Minister for Agriculture and the Sea promised dredging last month all as a matter of urgency yet if the fishing associations are right, there is no mention dredging in next year's state budget. Hence my Funding comment.
Plenty of dredging going on 'oop north, also in the Guadiana courtesy of Spanish. organisation but none to help the fishermen in the Ria who the government view as increasingly annoying.
0 #1 Peter Booker 2014-11-06 06:17
… the dredging problem … the work has not been done due to funding….
Editor, this comment is opaque. What funding? When was it available? Who did not apply at the right time?

As for the demolitions, you are right that any lawyer worth his salt will be able to use the legal system to ensure that nothing is done.

I think that Paulo Lemos should be rechristened. He should now be referred to as Salgados Lemos.
Refresh comments list