Ria Formosa pollution, who is in charge?

Local pressure group Olhão Livre has published a damning blog into the continuing pollution in the Ria Formosa where thousands of fishermen make their living, 10,000 is its estimate.

Blame is levelled at a complicit council which is aware of the pollution that affects the harvesting of bivalves in the Ria area, but there may be more to the story.

The environmental pollution has long been known to the council which Olhão Livre says has failed to act, but it is not alone as a wall of indifference has allowed toxic sewage to be discharged into the waters despite stringent controls that are in place in law but not acted on by the agencies that are there to protect the public.

Because of the sewage outfall into the Ria at known points, pollution crimes are being committed regularly but with the bland acceptance of those very authorities that are meant to control and force an end to such incidents.

A failure to control pollution last year saw more than 70% of the shellfish farms in the Olhão area downgraded from Class B to Class C due to excessive fecal coliforms found when analysing the bivalves. This is in an area that depends on tourists coming from far and wide to the city's restaurants, to its annual seafood festival. Many factory jobs depend on processing fesh, unpolluted seafood.

This situation has been growing in seriousness for years. A movement called Avisar Toda a Gente (Warn all People) was set up in 2006 which formally advised the authorities responsible for the Ria Formosa that pollution was being pumped into the Ria Formosa.

This pioneering movement alerted a wide audience to the pollution levels but still nothing was done. Then came Somos Olhão (We are Olhão) in 2009 which alerted national officials and even warned the European authorities about the serious problem of pollution in the Ria Formosa.

Somos Olhão complained to the European Commission as nothing was happening locally to stem the flow.

Local officials have been aware for years of the environmental crimes with poisonous run-off entering the water near the traditional salt and flor de sal areas to the west of the city.

The law here is clear and states that there cannot be any source of pollution within 500 metres of these salt producing areas. This puts salt production in danger of contamination as well as the outflow affecting the Ria’s shellfishing industries.

Olhão Livre says that the minister for Agriculture and the Sea, Assunção Cristas, knows of the situation and that ASEA should therefore have been instructed to act where the law is being broken.

The photograph above was taken at discharge point of the Waste Water Treatment Plant to the west of Olhão at Belamandil, this is an all too common site.

Olhão Livre claims that the two environmental organisations, Almargem and the League for the Protection of Nature have not got to grips with the situation of pollution in an area that is renowned for its shellfish and supposedly pristine waters and is concerned that only an outbreak of Hepatitis A will end the obvious pollution.

In January 2014 the environmental association Quercus demanded that Águas do Algarve build a new Waste Water Treatment Plant between Faro and Olhão to reduce the pollution currently being released into the waters of the Ria Formosa natural area between Olhão and Faro.

The water company says the new treatment plant has already been started, but with an expected operational date of 'late 2017,' a long wait before the Ria Formosa waters again can produce the top quality shellfish for which the area is renowned.

This news was disappointing as in the meantime the environmental laws will continue to be broken on a regular basis.

Águas do Algarve only admitted its deliberate pulluting of the Ria in an interview with Sul Informaçao in January 2014 and said that discharges from old treatment plants have 'occasional peaks where there is non-compliance,' but Isabel Soares, president of the water company, says the company will not take sole responsibility for the poor water quality in the Ria as sewage also is flowing into the Ria from Olhão’s own overburdened city sewage and rainwater pipework systems - as seen in the picture below.

The debate to date has involved the EC, government ministers, national political parties in power and in opposition, environmental groups, local interest groups, fishermen associations, tourism bodies, MEPs, MPs, the local mayor and local opposition, with Quercus registering its "indignation at a situation that affects the lagoon ecosystem, the economic activities of the region and the population,” and reminding the water company that the all-too-common bans on the harvesting of shellfish from the nurseries have been caused by the foul water emanating from its clapped out sewage plant.

Águas do Algarve is making “all efforts” to progress the new treatment plant in order to solve the sewage problem, according to its spokesperson. The company expects to be able to launch a public tender for the work early in 2015, the fastest they say, that they can work within the legal parameters set.

The long awaited and urgently required work to stop sewage being pumped into the Ria Formosa is likely to start at best in early 2016 as “a sewage plant of this size takes two years to build," with the work lasting at least until the end of 2017.

This sloppiness and sloth from Águas do Algarve is lamentable and has caused dismay among local pressure groups such as Olhão Livre, environmentalists and those thousands dependent on the Ria Formosa for their livelihood.

So, Águas do Algarve, the company that has caused a major part of the problem, cannot solve the problem for years and seems content that it is breaking the law in the meantime, after all, no one has ordered a halt to its contaminated discharges and nobody in the ministries and law enforcement agencies seems remotely bothered that one of the Algarve’s supposed gems is in fact deeply flawed.

From Olhão council's viewpoint, if tourists stop coming to sample the shellfish due to entirely preventable pollution concerns, real or imagined, it will be hit in the pocket;  to many people the main attraction of the city is the wide choice of restaurants and its reputation for fresh seafood.

Olhão Livre will continue to put pressure on those it holds responsible, this charade has gone on long enough and action is needed to enable the quality of the tourist offering to match the reputation of the Ria Formosa as one of the Algarve's finest attractions with unpolluted water and produce fresh from the sea. 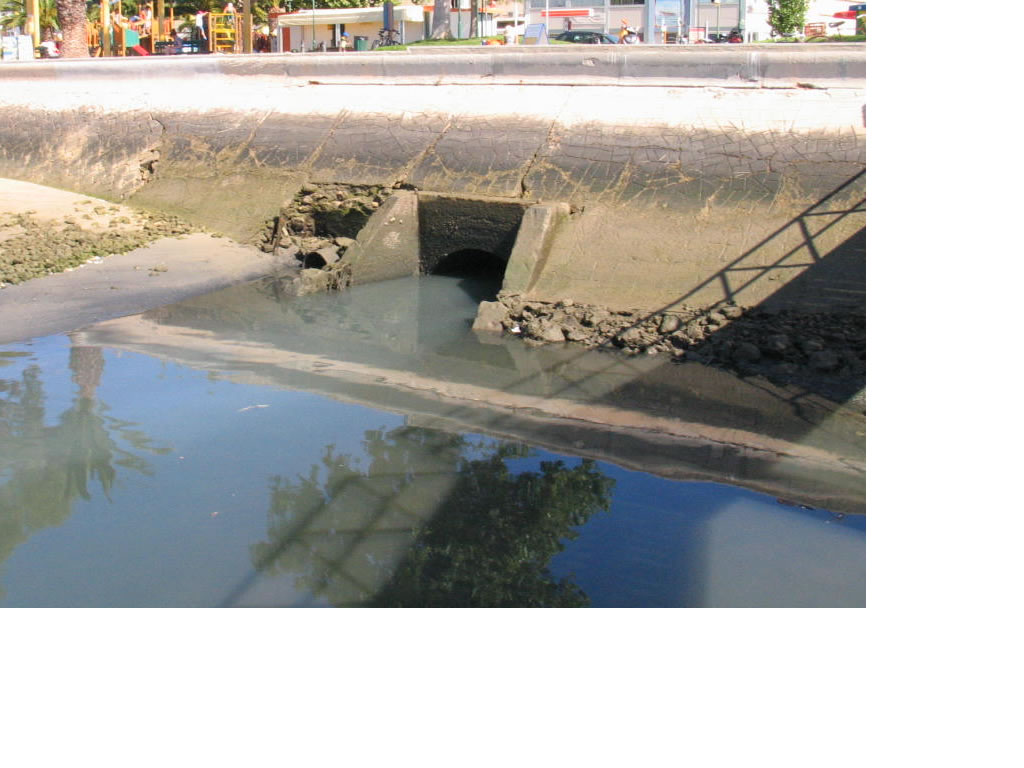 The Camara are being given €12 million to upgrade Olhao and plan to pull down and modernise the historic centre, yes really !!!.

The Camara are looking at a plan from a Lisbon architect to modernise the historic centre and the area around the market. Representatives from concerned expat locals met the mayor yesterday and discussed whether there was a need for more block paving and harsh lighting in the historic area when a wash and brush up is cheaper and keeping the wonderful and famous calçada, plus better signage is all that is needed to keep Olhao as a favourite destination for thousands or tourists who want to see a real working town, not a showpiece lacking in soul. The council says it is making some progress with the sewage outflows in the city, but clearly this needs more attention.

See also:
http://www.algarvedailynews.com/features/politics/3883-save-olhao-see-the-city-centre-plans-and-how-to-register-your-views
+3 #4 SueQ 2014-11-26 17:13
The Camara are being given €12 million to upgrade Olhao and plan to pull down and modernise the historic centre, yes really !!! How about they spend this money wisely on modernising the sewage system and continuing to bring in tourist money who visit Olhao for its 'quality seafood' and its historic centre.
Wait though, on rereading it sounds very sensible, so no hope that Olhao Camara will take any notice at all.
+6 #3 Ed 2014-11-26 09:22
Quoting Peter Booker:

I suspect that Lewis Carroll made extensive visits to the Algarve before he wrote Through the Looking Glass.

“Contrariwise,' continued Tweedledee, 'if it was so, it might be; and if it were so, it would be; but as it isn't, it ain't. That's logic.”

This yet again shows well how Portugal has consistently failed the EU.

And how pointless it is to keep propping this country up with endless amounts ... hundreds of billions of euros over the years. The bulk of which was just getting diverted off-shore into the bank accounts of friends and family of the elite.

Note how Socrates best mate from years back is also before the judge. Allegedly been helping Joe hide some of the bribes and backhanders amassed over a lifetime as a Portuguese politician.

Clearly all Socrates 'mates' over the years need checking out .. so he cannot be released from Evora prison in case he says 'Dakota' to them. And they destroy their records, if they have not already done so.

But leaving paltry sums to invest ... in this case in EU standard clean water for food grade produce.

Yet ASAE will happily hound a foreign shopkeeper and foreigners at market stalls ... closing them down where possible. Endless frittering at the margins.

The easy targets that do not tread on any local heavyweights toes.
+1 #1 Peter Booker 2014-11-26 08:30
Why does it take a government agency to bring a prosecution? Can these environmental bodies not bring Águas do Algarve to book?

There must be a way to bring an injunction to prevent the law being broken. No hang on, this is Portugal, where everything happens backwards. I suspect that Lewis Carroll made extensive visits to the Algarve before he wrote Through the Looking Glass.
Refresh comments list