The mayor of Olhão today welcomed news that after decades, dredging will take place in the Ria Formosa area during 2015, but took the opportunity to accuse Polis, the management body for the Ria Formosa, of failing to make the many investments that originally had been planned for the county.

The Minister of the Environment announced on Wednesday that €8 million would at last be spent on dredging among the Ria Formosa islands, the upgrading of the access to Faro beach and the construction of a car park there.

Olhão mayor António Pina regretted that the planned investments in upgrading Armona island, Praia dos Cavacos and the Olhão waterfront simply had not happened (despite Polis being awash with money,) and that he was considering a lawsuit against Polis.

Faro and Olhão councils are pleased that the dredging will be taking place, having waited 20 years, and Pina noted that it made no sense at all to spend €5 million knocking down houses on the islands because 'this is not a priority for the environment, as opposed to dredging which is.'

As for the problem of sewage in the Ria Formosa, António Pina said that he is "about to release the tender for the construction of a new Wastewater Treatment Plant (WWTP) between Faro and Olhão."

According to Pina, the Ministry of Environment has given directions to Águas do Algarve to make this a priority project as it already had its Environmental Impact Statement done and nothing is stopping the work but bureaucracy. Águas do Algarve had planned the new treatment plant for completion in 2017.

Faro council stated today that it already has started the tendering process for the dredging of the Faro-Olhão channel, and the work should be done between March and August 2015.

The cost of dredging will be around €4.8 million, together with the car park and work on the beach and fixing the access road (€1.7 million) resulting in a total investment of €6.5 million in Faro municipality. This is the price it took to turn the mayor in to a supporter of the demolition of people's houses.

The destruction of property continues apace with some people having already taken away contents; in some cases whole buildings have been removed by their owners. The machines have started to raze those structures that remained.

The Minister of Environment and Spatial Planning was on site yesterday to see the work got off to a brisk and decided to use excuse 1a. for why the bulldozing of property was so vitally important to the war effort.

"We do not want the scenes of destruction caused by the sea, such as in Fuseta in 2010, be repeated elsewhere," said Moreira da Silva whose personal brand of logic noted that four years ago waves of over six feet had swept away many homes so is was best to remove the rest so they can not be damaged.

In total, 193 houses and huts will be removed by force from Ramalhete, Deserta, Cobra, Ratas, Coco and Altura by the end of the year.

In January about 700 storage huts and alleged second dwelling will be razed in areas to the west and east of Faro island on the Ancão peninsula, from Hangares, near the lighthouse and on Culatra.

In total, 110 families will be ‘relocated’ meaning council accommodation on the mainland which many will struggle to afford, or staying with relatives’ as has already happened causing more overcrowding.

Of the 800 houses to be demolished, "only 12% are first homes," said Moreira da Silva who assured everyone that the authorities had taken "great care with the issues of social support and that no housing will be demolished without people being relocated."

Many fail fully to agree with his opinion and it is not clear whether the Minister has spoken to locals on this topic, or whether he has relied on acolytes to tell him what he wants to hear.

This announcement by the minister today prompted a statement from the Faro council which strangely now is 'pleased with the progress of the works within the Polis Litoral Ria Formosa intervention.'

Faro council clearly has been got at to perform this almost perfect 180 degree turn over the demolition of property on its islands. Recently, the full council gave hope to anyone with a social conscience as it voted vehemently to oppose exactly the series of actions that now are taking place to clear the islands of locals with large beards and their shacks.

With the promise of dredging, the mayor now is of the opinion that "despite the different positions relative to other options in the Polis Programme, for Faro we must recognise that the Ministry of Environment has made an effort to meet the concerns expressed by us several times throughout this process."

Rogério Bacalhau has a reputation for spinelessness; this now has been confirmed and his price was low. The promise of dredging was enough to lose him the respect of much of his electorate, a position that will be confirmed at the next election.

How he will explain his U-turn to the Faro assembly which has only just voted against the destruction of property, remains to be seen but his reputation lies in shreds on the floors of bars and cafe's across Faro.

Here we see the Faro mayor chatting with the minister as they pose for a photo opportunity on one the island where the destruction of property, without thought or planning in the provision of fishing huts and homes for the displaced islanders, continues apace.

The Faro leadership of course has a history of spectacular U-turns with the November 2011 Macario Correia volte face over the A22 Tolls remaining a textbook example of how political pressure and promises of wonderful alternative packages can sway weak-minded, malleable, ambitious yet gullible leaders. 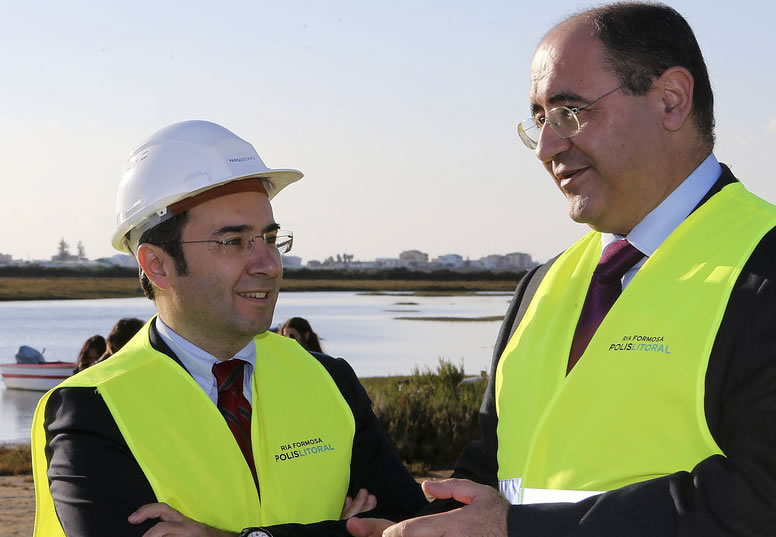 The destruction of private property is as follows:

In this trade off, are we getting the ludicrously expensive new bridge, or the cheaper one which is all we need?

It is too late under the Polis scheme to settle on a design, get quotes and issue a contract to build the wavy bridge.

The work planned near the bridge seems only to be a new carpark area rather than fixing the bridge which as we have been told, is in need of repair. Hopefully I am wrong and the urgently needed repairs at least will be done but the government is keen only on knocking down property, not building bridges - both physical and metaphorical ones.

In this trade off, are we getting the ludicrously expensive new bridge, or the cheaper one which is all we need?
Refresh comments list