The iconic leader known as El Jefe outlasted 10 US presidents and, for better or worse, transformed Cuba.

Fidel Castro brought free medical care to a small island nation, suppressed dissidents and infuriated his opponents at home and abroad after overthrowing a dictatorship in 1959.

Having passed on the leadership of Cuba's single-party state to Raúl in 2008, Fidel played a ceremonial role during his twilight years, showing up to meet foreign leaders in a track suit, rather than his trademark military fatigues, and writing treatises on global warming and economic inequality.

Friends and foes agree he was one of the most iconic and shrewd politicians of the 20th century; a consummate survivor and wily tactician.

"He was reasonable, not domineering, as one might expect," Wayne Smith, a former US ambassador to Cuba who knew Fidel, told Al Jazeera.

The son of a wealthy landowner, Castro was born in 1926 and studied law before pulling together a band of fellow revolutionaries with the aim of overthrowing Fulgêncio Batista, Cuba's dictator who had extensive links to the American mafia and other business interests.

Smith believes that the political awakening of Castro, who benefited personally from a near-feudal system of governance on the island, was "a similar trajectory to a rich kid radical".

Although intellectually gifted, Castro had more interest in sports, particularly baseball, than formal school as a lad.

"Fidel had a strong will. He was convinced that after Cuba got its independence (from Spain), his home country had been forced into a new dependence with the US," one of Castro's biographers, Volker Skierka, told Al Jazeera.

As a child he "had a good relationship with his mother" but spent much of his life fighting his father's bourgeois influence, Skierka said.

His early political convictions, formed while studying at the University of Havana, seemed steeped in progressive nationalism, rather than traditional Marxism, according to his biographers.

Captured in 1953 for assaulting a military base, Castro was sentenced to 15 years in jail. He defended himself during his trial, announcing that "history will absolve me". He was later released as part of a political amnesty. Writing off Castro would be no easy feat.

"The first time his photo appeared in the New York Times was in 1956 to report that he was killed," Anthony R. DePalma, a former New York Times reporter in Cuba and author of The Man Who Invented Fidel, told Al Jazeera.

Newspaper editors around the world would come to know Castro's beard and cigars following the revolution's victory.

After sailing back to Cuba from Mexico with a group of would-be revolutionaries in 1956, Castro, Che Guevara and other radicals began launching attacks on military bases and transportation infrastructure, in a bid to end what they considered to be a corrupt and exploitative dictatorship.

"His bearded, youthful figure has become a symbol of the continent's rejection of brutality and lying and shoddiness," the UK's Guardian newspaper reported in 1959. "The new democracy (in Latin America) owes its existence largely to the courage of young idealists."

Of the words used to describe the departed leader, "democrat" isn't usually one of them. Some believe the young Castro always harboured authoritarian tendencies - the desire to reshape history with one's own hands does not usually meld well with consensus, compromise and relinquishing power. Others think he was pushed towards the role of strong man by external pressures and the need to defend the revolution from outside attacks.

After the revolution, Castro and Guevara proclaimed a new era in Cuba, embarking upon a literacy campaign and nationalising large plantations, among other transformative programmes. "His objective was to bring about a hemispheric revolution - not a communist revolution, but a progressive one," Smith said. "Certainly, that meant reducing the influence of big business and likewise the influence of the US."

Castro did not refer to Cuba's revolution as socialist until April 1961, after failed attempts to negotiate a compensation deal with the US following nationalisations, and a group of Cuban exiles, backed by the CIA, tried unsuccessfully to invade the island at the Bay of Pigs. The US also imposed a harsh trade embargo, which continues to this day.

As administrators, Castro and Guevara bungled Cuba's important banking and sugarcane industries, and, by the late 1960s, the island had fully relapsed into dependency on foreign countries. This time, exports of raw commodities abroad were framed as cooperation with fellow socialist countries, rather than mafia-style capitalism.

"As a leader, (Castro) often let demagoguery or ideology, get in the way of making proper decisions," DePalma said. "He didn't know much about agriculture, mining or the production of sugar or electricity, but he had his fingers in everything."

Alina Fernández, Fidel's daughter, fled the island for Miami with hundreds of thousands of other Cubans. Fidel considered his father to be an exploitative member of the bourgeoisie. Fernandez has referred to her father as a "despot".

After the collapse of the Soviet Union, most observers thought Castro would fall, too. But it did not happen. Nevertheless, Cuba suffered an economic catastrophe in the so-called "special period" after the USSR's break up. This manifested itself not only in a massive decline in gross domestic product, but also in Cubans losing weight as a result of malnutrition. Economists consider Cuba's "special period" to be one of the worst contractions of the 20th century.

But Castro remained devoted to doctrinaire socialism. "They talk about the failure of socialism," the Cuban leader once said. "But where is the success of capitalism in Africa, Asia and Latin America?" 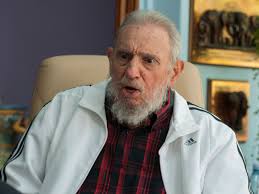 In the final years of his reign, Castro pushed Cuba to develop its tourism industry to make up for the financial troubles caused by the Soviet Union's demise.

He formed strong friendships with other Latin American leaders, including Venezuela's late Hugo Chavez, and intellectuals including the Colombian writer Gabriel García Márquez, who is said to have based his novel The Autumn of the Patriarch on the Cuban strongman.

Cuba's signature health and education programmes have deteriorated slightly in recent years, according to critics. But while elements of Castro's legacy can be seen in derelict buildings in Havana, cramped accommodation and poor rural villages, the country fared better under his leadership compared to some of its Caribbean and Latin American neighbours.

"Cuba is a poor country, but people did not live in the kind of misery as many other Latin American people in the surroundings of Lima or Mexico City," said Skierka, the author of Fidel Castro: A Biography. European diplomats estimate that 70 percent of Cubans would back the Castros, if free elections were held, Skierka said.

Despite critiques from the US and much of the Cuban diaspora that Castro was little more than a dictator, Smith believes the revolutionary lawyer helped open the door to a new kind of leftist politics now sweeping across Latin America.

"What Castro wanted originally - more liberal leaders in Latin America - did in a sense come true, though not from the barrel of a rifle," the former US ambassador said.

"It's going to be fascinating to see how Cuba evolves. I think they will go towards the model that Castro wanted in the beginning."