‘If you want to keep it, give it away’ - Dermot Staveacre, RIP 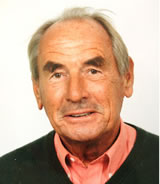 ‘If you want to keep it, give it away’ - Dermot Staveacre, who helped countless addicts in Portugal conquer their dependence on alcohol or drugs, has died peacefully in his home in the Algarve, on 9th June, at the age of 76.

The old adage about life beginning at 40 was not far off the mark for Dermot Staveacre. For years he had been an alcoholic on a steeply downward spiral, drinking a bottle of whisky a day. By the age of 41 he was a down-and-out. He had lost his home, his savings, his job and his friends. On the edge of the abyss, he finally sought help in an English treatment centre.

That was 35 years ago and that is how long he remained a non-drinker. For most of those years he continued helping other alcoholics and drug addicts make the same life-saving adjustment he made.

Central to his work in Portugal as a counsellor was a conviction first voiced in the mid-19th century by an American psychologist, Benjamin Rush: alcoholism is an illness with the same basic characteristics of other illnesses. It has a cause (alcohol), symptoms (loss of control) and a way to recovery (abstinence).

“This is the crux of the whole problem. In its simplicity it is as true today as it was 150 years ago”, Staveacre said.

“Addiction to alcohol or other mood changing substances, like heroin, seems to be hereditary and it seems to effect about 10 percent of the population. It has nothing to do with poverty or riches, intelligence or stupidity, being good or bad at sports.

“If you put 10 students in a room and fed them all heroin, nine would emerge not wanting it again and one would become an addict.

“Because those addicted to heroin are suffering from chemical dependency, were heroin not available to them it is probable they would become chronic alcoholics 10 or 20 years later”.

Staveacre agreed that there is a grey area between the social drinker and the full-blown alcoholic. The difference is in the symptoms.

“The alcoholic cannot go into a bar and say, ‘ I’ll have two beers’. Normally he has no control over the amount he drinks. But it goes much deeper than that. If a drinker puts alcohol before his work, his finances, his family, his health or the law, it is probable he is an alcoholic and has lost control of his life.

“Limiting or controlling consumption for an alcoholic or drug addict is impossible in the long term. Recovery from addiction is only possible through total abstinence”.

If the illness is in the genes, all it needs is a trigger. The problem then invariably goes from bad to worse until a point of crisis is reached. Most – perhaps 90 percent or more - die of cirrhosis of the liver, overdosing, accidents of one kind or another, or suicide.

Of the individuals who survive, “there needs to be a crisis which leads them to willingly to accept help”, said Staveacre. “An alcoholic or addict will continue so long as it is more comfortable to continue than to give up”.

He estimated that alcohol or drug addiction at any one time affected more than 30,000 people in the Algarve, but most wanted to cover it up.

“I knew a foreign couple who lived in the hills behind São Brás de Alportel. She would drive down into town to buy her husband the booze because she was afraid he would crash the car. It would have been better if he had crashed the car, because then he would have had to face up to the consequences.

“In my own village there are two men, both working, who spend all the money on heroin, while their mothers, both widows in their 70’s, house them, feed them and clothe them.

While the sons live in this sort of comfort they will continue to be addicts”.

Staveacre worked closely with families and loved ones who needed education, guidance and counselling as much as addicts themselves.

“What I try to do is help people face reality. But, of course, it is more comfortable to talk about a problem than to do something about it”.

With support and the vital ingredient of personal commitment, addicts can turn their lives around remarkably quickly – in a matter of weeks. There again, it may be easy to stop drinking or using drugs. The difficult bit is staying stopped.

Naturally, Staveacre saw a good deal of human misery but he was very upbeat about his work because, he said, “there is the other side of the coin – the people who get into recovery and start living quality lives”.

After training and working in England for several years and spending time at the Hazelden Foundation, a precursor to the Betty Ford clinic in Minoso in the United States, Staveacre ran a drug rehabilitation centre near Castelo Branco in central Portugal. He went on to make regular visits there to counsel counsellors.

In the Algarve he saw clients privately in his home in Pêra. He believed his own recovery from alcoholism gave him an advantage over other trained specialists.

”I can read the mind of an alcoholic or an addict much more easily than a psychiatrist or psychologist because I have been there. I don’t need to know the answers to questions like, why do you do it?

He was a firm advocate of the philosophy and methods of Alcoholics Anonymous and Narcotics Anonymous. In helping others, members help themselves and refresh their own commitment. Staveacre recalled that delightful Zen-like saying: “if you want to keep it, give it away”.

After 27 alcohol-free years, Staveacre suddenly found himself faced with an illness of a very different kind. A serious heart problem was diagnosed and he was taken to Lisbon where he underwent a quadruple bypass operation.

“I’m still in denial about it”. he said with a smile some time later. “They open the chest cavity, deflate the lungs, take out the heart and put it on a slab, stick you on a life-support system, tear a vein out of your leg, cut it into bits, put the heart back in, inflate the lungs, put everything together up and down with steel clips and give you a 30-year guarantee. I feel almost as well now as before I went in”.

See an obituary in the Guardian newspaper here: https://www.theguardian.com/society/2017/jun/21/dermot-staveacre-obituary

The funeral will be at 3pm,Friday 23rd June, Igreja de São Francisco de Pêra, on Largo São Francisco, 200 metres behind the main church (Igreja Matriz de Pêra) in the centre of the village.

After the burial, friends will be welcome yo join members of Dermot’s family at his flat at no.10, Rua Bartolomeo (500 mettes from the cemetery).

A family spokesperson says: “Should you wish to make a charitable donation rather than give flowers (very much Dermot's wishes) there will be a large leather collection case in the church. Proceeds will go towards one of Dermot’s favourite charities, the Santa Casa Misericórdia old folks home in Alcantarilha”.

Family and friends from the United States, the United Kingdom and Ireland will join the local community at his funeral service in Pêra on Friday 23rd.

Article by kind permission of Algarvenewswatch.blogspot.pt