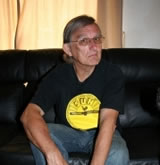 Graham Richards died sometime during the last weekend of 2014 at his home at Mirande, Gers France. His death appears to have been as a result of falling down the stairs. He was 65/66.

Well before 2008 Graham had taken on the voluntary role of European contact for EMAG – ‘Equitable Life Members Action Group’ a group which still seeks justice for the investors in the Equitable Life Assurance Company, where incompetence of oversight by the British Government brought a great many pension investors to financial difficulties.

It was with knowledge of this that Graham was approached in 2008/9 to see if he would take on the role of publicity officer (see note*) to support the campaign for the repeal of the 15 year rule which prevents several million British Expats worldwide from voting.

Graham repeatedly urged the several million more expatriates who still retain the right to vote, to register to vote, using the many editorial and expat contacts he had developed over the years including the 'algarve daily news.'

Graham had, before his early retirement, a career in the banking sector where he worked in the Gulf. His formative years were spent in the Clapham region of London.

He was immensely proud of his early life as a Londoner. He went to the local Grammar school and then started ‘at the bottom’ in banking and worked his way up. He followed the local football teams and was at one time a referee.

From his first marriage he had two sons, the youngest ‘Gregor’ became a Lieutenant in the Navy and was bridge officer on HMS St. Albans.

Graham frequently mentioned Gregor’s career as a representative of Britain’s armed forces. He repeatedly felt that the British Government had let down the work of the retired military who chose to live abroad after retirement.

He married for a second time Josette, a Frenchwoman, who helped him settle near Mirande. She died of cancer two years ago and he greatly mourned her loss.

Graham would certainly wish that the fight to achieve democracy for the British Citizen resident abroad continues.

"This fight must continue."

Expatriates everywhere, owe him a great debt. It is  partly due to Graham's efforts as well as that of other campaigners, that UK MPs are now at last paying serious attention to the needs of expatriates.

There is still much to do.