Change of her Britannic Majesty's Ambassador to Portugal

Mrs Kirsty Isobel Hayes has been appointed Her Britannic Majesty's Ambassador to the Portuguese Republic in succession to Mrs Jill Gillard, who will be transferring to another Diplomatic Service appointment. Mrs Hayes will take up her appointment during August 2014. 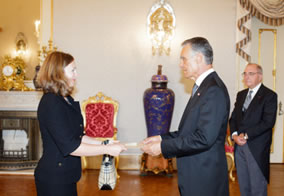 Mrs Hayes joined the FCO in 1999. Her most recent post was as Head of the FCO's International Organisation Department, where she was responsible for policy on the United Nations, the Commonwealth, OSCE, war crimes and sanctions, and was the UK's lead negotiator at the 2013 Commonwealth Heads of Government Meeting. She has had postings in Washington and Hong Kong, as well as spending three years in Sri Lanka accompanying her husband who was then British High Commissioner. Whilst in London she has worked on areas including the European Union, the environment, human resources and communications.

On her appointment as Her Majesty's Ambassador to the Portuguese Republic, Mrs Hayes has said:

“It is a huge honour to be appointed as British Ambassador to our oldest ally, Portugal. Portugal and the UK have played central roles in shaping world history and continue to share vital interests, including in pursuing openness and growth in Europe. I look forward to working with Portugal in these areas and to supporting the many British people who choose to visit or live in this stunning country. I am also delighted to have the chance to explore Portugal's rich culture and heritage, as well as its beautiful language, which is now amongst the most widely spoken on the planet.”