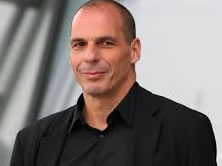 They used to say the EU lacks a narrative. The crisis has remedied that. The high stakes poker game being played out by Angela “cool-hand” Merkel and Yanis “mother****er” Varoufakis has unleashed a colourful social media storm, which continues to throw up surprises, the latest being a successful German attempt at humour.

Featuring self-parodying stereotypes: blitzkrieg, parents slapping children, slapping generally, and the observation that “We started two world wars and almost won them both,” a video from Neo, a programme created by national broadcaster Zweites Deutsches Fernsehen (ZDF), is the latest to enter the fray.

The video – called “V for Varoufakis” – fuels the celebrity death match being played out on social media between between Mutti Merkel and her leather-jacketed, game-theorising Marxist opponent.

Shaven-headed Varoufakis is described as “the Greek minister of awesome” and “the walking debt”, depicted licking a motorbike seat and described as having musky tasting armpits.

The lost son of Zeus smells of sex and puts the hell in Hellenic, according to the video.

All of which will come as little surprise to Varoufakis presumably, since the social media storm has already seen him as Dr Spock, Bruce Willis in the action film Die Hard and the Terminator.

Varoufakis would doubtless welcome the storm, given that he is known disciple of twisty neo-Marxist German philosopher Jürgen Habermas, whose ideas – insofar as anyone understands them – push for simple media narratives within the political demos. Indeed, the German Noam Chomsky has thrown his Frankfurt School weight behind Greece in the debate.

Nevertheless the latest video is quite a coup for Merkel’s side. Tackling head-on some of the darker noises coming from Greece about Nazi-era crimes through humourous allusions to German gold reserves (“Don’t ask where it came from”) and comparing rock star Varoufakis with Germany’s own finance minister Wolfgang Schäuble (“Our finance minister doesn’t even have legs”) is quite disarming.