Despite the European Grexit saga – or maybe because of it – it seems that investors are sensing the chances of bargain-priced properties - and they would be correct. As Knight Frank put it when examining demand for island property, there is likely to be a Greek “fire sale”. At the same time, Greek agents admit that some prime property prices have halved over the last few years.

Combine that with the considerable fall in the value of the Euro against other major currencies – partly caused by the Greek crisis – which pushes up the spend of many foreign buyers and you can see why agents and developers are seeing increasing overseas demand.

Svetlana Kuklina, from the Greece.ru estate agency, says many overseas clients are looking for bargains. “Prices cannot go much lower. We’re talking about very, very big savings. Some villas that were valued at €2m are now going for €1m [£720,000],” she told The Independent on Sunday.

Greek real estate agency IRM Aegean Estate has a long list of reduced properties on its website and says villas on Syros that cost €1.6m a few years ago, are now selling for half as much, according to founder Isabelle Razi. Chinese and Russian investors lead the demand, with Bulgaria and Serbia buyers also prominent. 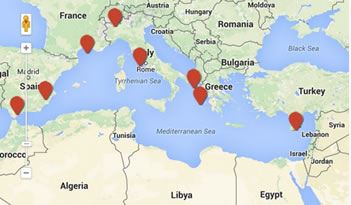 The popularity of Greece real estate is underlined by its appearance in TheMoveChannel.com's (TMC) Top 5 Hotspots in Quarter 2, 2015, for the first time.

The popular overseas property portal's latest Hotspots Index reveals that Europe has never been more attractive to house-hunters with Zakynthos - or Zante - a Greek island in the Ionian Sea placed fifth in TMC’s most popular destinations from April-June 2015.

TMC’s Editor, Ivan Radford says, “Greece may be in a period of economic uncertainty, but the country's impact upon the weakening euro has prompted a surge in searches from eager property buyers. With the pound and US dollar recently at historic highs against the single currency, there has arguably never been a better time to snap up a Greek island home for a bargain.”

Braga, in Portugal led the way on 2.13% of all searches by location, ahead of Rome, Italy (1.55%), which topped searches in the previous quarter, with Malaga, Spain (1.46%) slipping into third and Protaras, in Cyprus, fourth.

Marseille and Como held onto their places within the Top 10, reinforcing the appeal of both France and Italy to overseas investors. Alicante, Spain, fell by four to ninth place and Armacao de Pera, in Portugal, climbed 18 places to enter the Top 10.

TheMoveChannel.com Director Dan Johnson describes Greece as the surprise success story of the year. “The country's economic problems have sparked uncertainty across the continent and beyond, but low prices and a weak euro have encouraged buyers and investors to snap up Greek property bargains.

“Greece made up four of the Top 50 destinations in the Q2 2015 Hotspots Index. This is down from Q1 2015, when it accounted for six, but the country now makes up two of the Top 10 locations, as demand grows stronger for select Greek hotspots. Together with Cyprus' rising popularity, it is proof that even the markets worst hit by the financial crisis can still be an attractive investment opportunity."

The Greek parliament has voted in favour of tough austerity measures required by the eurozone for a third bailout deal in return for a €86billion (£60bn) bailout deal.

Greece has debts of €320billion and last month became the first developed country to fail to make a repayment on an International Monetary Fund loan.

The European Central Bank has raised the level of emergency funding available, which has paved the way for Greek banks, which shut three weeks ago, to reopen tomorrow (Monday). There will no doubt be long queues forming.