“Halleluyah, Halleluyah,” rang out again and again across the esplanade and the beach front for a good 10 minutes. It was an inspiring sound if somewhat mournful. It was sung by members of the local Church of the Navigantes, who had gathered there to hold a service in honour of their religion and to give thanks and also to seek the help of the Almighty in keeping the men of the fishing fleet safe out at sea.

One might ask, what was Leonard Cohen doing in the Western Algarve around 5 o’clock on an August Saturday afternoon. Well, you, and he, would have to have been there to accomplish that. Also the issue of reincarnation would have been overcome. But nevertheless “Halle-lu-yah, Halle-lu-yah” continued with even greater gusto and feeling. The members of the congregation were really enjoying what they were doing. 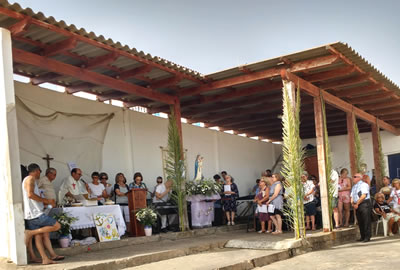 This gathering had been started with a procession, led by the robed vicar, from Salema’s church. Thirty or so folks sang their way down through the village, over the bridge and into the open sided storage space at the end of the Miromar esplanade. Normally old men gather there to pass their days, along with the tractor which is used to haul the fishing vessels out of the water and off the sand.
Last Saturday afternoon it was adorned with empty chairs and some lady pensioners awaiting the arrival of their friends walking in the procession. The tractor had actually been parked alongside the “massage” four-poster, that during the summer months adorns the beach.

The singing continued unabated, moving from one hymn to another with the local vicar leading the gathering. The ladies of Salema, in their Sunday best, enjoying the occasion and somehow accommodating the curious “Visitors” who insisted on taking up positions which blocked their views of the vicar.

I sat there amazed by the obvious dedication of the congregation to their religion and was becoming more and more bewildered by the diversity of the human race.

The paddle boarders, the boogie boarders, the canoeists, the swimmers, the sunbathers, didn’t give a monkey’s about what was going on outside their zone. I noticed that the hymn singing also didn’t affect the sale of “Oliboliya” one bit. How odd we all are. What a mixture this human race is.

The tractor began to drag some of the decorated fishing boats closer to the water. The service would continue out at sea. So, following the communion, the gathering sauntered down to the water and took their places in the boats.

Even then the majority of the sunbathers and swimmers continued doing their thing, oblivious to the what had gone on and what was now happening in the rest of the world fifty yards away.
Well they have to get their relaxation in, ahead of tonight’s beach concert, which was due to kick off in a couple of hours time.

I strolled on down to the end of the esplanade. Saw the empty stage and decided it was not for me.