Review of 'Whose Life Is It Anyway?' play by The Algarveans

Back in 1979 when I was visiting England on a trip, I went to see a new play that was the talk of London, Whose Life Is It Anyway? starring the (then) young actor Tom Conti. It was the rave of the year and his performance earned him a Tony Award. When I heard that this Algarveans’ production starred a woman as the lead, I wondered whether the dynamics would work. I didn't realise that Brian Clark, the playwright, had updated the script to give it a new look for modern audiences.

It is no easy subject to consider; a patient paralysed from the neck down contemplating her future life after her fulfilling life as a sculptor is cut short in a road accident. Her doctors have patched her up as best they can, feeding her tranquillisers and pain killers - even against her own wishes. She wants to be released from hospital, something against the head doctor's morals. So, the argument goes on. Can a patient be of sane mind after the trauma of a major 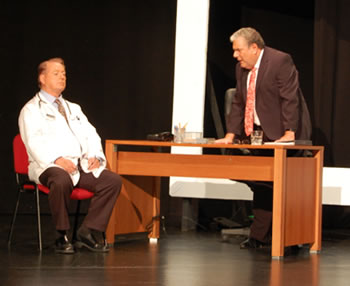 car accident? Can she make her own, rational, decision - even as it probably means it will cause her to die?

The patient whose life is in “play” is Claire Harrison, played by Deborah Kloegman. Imagine, she lies in bed throughout the play unable to move from her neck down as she controls the pace of the play. Deborah came up to this herculean task in spades. Even in her supine state she was able to maintain our focus and sympathy throughout. A feat indeed! The supporting cast harmonised beautifully and we, in the audience, were sucked into the dilemma – save this lovely soul at all medical costs or let her take her own way out.

Paul Kloegman’s professional directorial ability shone throughout the whole play. For my taste I would have liked to have seen Dr Emerson more aggressive - playing the “bad cop” to Dr Scott’s “good cop”. A newcomer the The Algarveans, Tracy Christiansen, made a very believable Sister and I loved Rui Louzeiro’s Brazilian cleaner – yes, he could have been even more Brasileiro. Madeleine Wheare’s judge was excellently portrayed. Type casting?

The set was beautifully minimal with the lighting moving from three different areas, well synchronised. The play leads up to an emotional climax where the legal arguments are considered, keeping us on the edge of our seats waiting for the final judicial decision. Well, like the rest of the audience around me, I left the theatre with tears in my eyes. Well done, Algarveans!