Upsetting the Natural Order of Things

Pandemics aren't the only things that can seem to turn the whole world upside down.  Or topsy-turvy, as we might describe it, if this were a cartoon for children.  (Don't say it!)

There are lots of so-called Gravity Hills or Ghost Slopes throughout the world; Portugal itself has two, at Braga and Viseu.  A gravity hill is where a downward slope appears to be an uphill slope, creating the optical illusion that water flows uphill, or a car with its brakes off rolls upwards.  Easter Island has one such phenomenon, which must confuse children trying to roll their Easter eggs.

While working in Cyprus, I frequently visited the Othello Restaurant, whose menu featured a section called 'Just Desserts', which made me a trifle uneasy, if you'll forgive the pun.  After lunch one day I mistakenly paid the time of day on the bill rather than the amount due, thinking 14.40 a reasonable price for two lunches with Saint Panteleimon, rather than realising it was twenty minutes to three and I ought to be back at work.  The actual bill turned out to be only 11.50, which tells you how long ago this was. 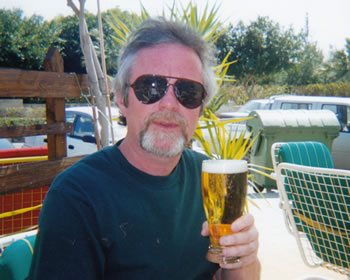 It was In Cyprus I also became aware of the saint called Panteleimon.  Not only because he appeared on the label of a sweet white wine, but he seemed like an early version of Greta Garbo.  He wanted to be alone.  He also wanted to be a martyr, but the natural order of things seemed to constantly work against him.

Like many modern anti-vaxxers, Panteleimon believed faith was to be trusted over medical advice, and this seems to have worked for a while.  He was tied to a great stone and thrown into the sea, but the massive stone floated; he was bound on a wheel but the ropes snapped; the sword bent when they tried to eviscerate him; a bath of molten lead grew cold as he stepped into it, and when wild animals were set upon him, they grew tame 'and fawned upon him.'  You have to admire his persecutors' perseverance in the face of these uncanny events.  They finally got fed up and chopped his head off, restoring reason to its throne.

I'm not a great believer in such optimistic phrases as "Give and you shall receive," because lots of people still owe me money, but I do know of one instance which upsets the form-book.  An Egyptian friend had spent the day and most of his money on fast food and slow camels, and was walking back to his flat in Cairo, cold and hungry, when he found an old woman begging in a pedestrian underpass.  Affected by the fact that "time had drawn a very complicated picture on her face," Ibrahim gave her the last of his money.  Reaching home a few minutes later, he found his brother Talal had come to visit, bearing food and repayment of an earlier loan.  (Huh!)

"It was a miracle, David," was Ibrahim's explanation, making me wish I trusted faith over experience, like Panteleimon did.  But I'm not a saint, yet.  And I'm constantly on my guard for gravity hills, since I lost that car and all my illusions.