Leading Algarve golf destination, Amendoeira Golf Resort, is putting final preparations in place ahead of hosting its first HotelPlanner.com EuroPro Tour Championship, the grand finale of the year-long Race to Amendoeira series.
The Algarve gem, whose Oceanico Faldo Course was also recently named within Golf World Magazine’s Top 100 Golf Courses in Continental Europe, is set to host some of the game’s brightest prospects looking to step up to the European Challenge Tour. Only the five top-placed players after three highly-charged rounds in Portugal will progress to Europe’s second-tier circuit.

Added excitement comes in the form of Chris Lloyd, who, with victory at Amendoeira, would walk away with an eye-watering bonus prize of £250,000 as the winner of four events during the 2017 season. To collect this truly life-changing sum of money, Lloyd will have to overcome stiff competition from his playing rivals, but also the challenge presented by the stunning Oceanico Faldo Course at Amendoeira, also ranked as best in Portugal by the World Golf Awards. 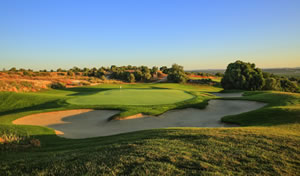 The highly-acclaimed Faldo Course reflects the playing style of its master craftsman, Sir Nick. With an emphasis on strategic play and rewards for accuracy, the championship layout will no doubt prove a sterling but enjoyable test for the Top 60 players on the HotelPlanner.com EuroPro Race to Amendoeira.

The resort, whose golf offering extends beyond the Oceanico Faldo Course, will provide the perfect setting for players to hone their games ahead of a huge week, featuring a second championship layout, designed by Irish legend Christy O’Connor Jnr; a comprehensive practice facility that includes a fitting studio and multiple short game areas and putting greens; as well as the 9-hole Par 3 Academy Course, the only floodlit course in Portugal.

Off the course, players will have plenty of opportunities to relax or prepare for what could be three life-changing rounds of golf. Whether it be the gym or sports club, or simply relaxing by the pool in one of Amendoeira’s luxury villas or apartments, which they’ll call home for the week, there will be an abundance of distractions for those seeking to switch off for a short time.

Upon player arrivals from a number of countries, including South Africa and the USA, the team at Amendoeira will showcase its renowned warm welcome and unparalleled hospitality, for which it was awarded ‘Algarve Golf Resort of the Year´ by the Travel & Hospitality Awards at the start of October.

Looking ahead to the championship, Chris Howell, Chairman of Oceanico Group, said: “It’s been a fantastic year for everyone at Amendoeira, being recognised with multiple awards and once again welcoming thousands of visiting golfers to experience both of our superb courses and accommodation."
“The HotelPlanner.com EuroPro Tour Championship is the perfect climax to another outstanding year and provides us with a great opportunity to showcase the very best of Amendoeira while welcoming some of the continent’s very finest golfing talent. It look set to be an occasion to remember for everyone involved.”