Algarve Air, Thick With The Smell Of Rubber

Last weekend saw yet more classes of motor sport concluding their series championships on the Algarve. The Portimao Autodrome hosted the Touring Cars, the LeMans Cup and the Le Mans European Series with championship titles up for grabs across all classes for both drivers and teams.

The Iberian Touring Car Championships could have sparked into life, with four races scheduled and two drivers battling for the championship title. Championship leader Francisco Mora's Seat Leon and Francisco Abreu's VW Golf GTI lined up on the start for a promising head to head title showdown.

However it was all over in just a matter of a few metres at the start of race one. Mora was clipped as they pulled away from the lights, sent into a spin, his car wrecked. This incident rendered him unable to return to the racing surrendering his 2017 title hopes. Abreu dominated the racing on the opening day, winning both of the races and with it the Iberian Touring Car crown.
Sunday morning seemed to be going the same way when Abreu picked up a drive through penalty handing the victory to the Audi RS3 driven by Rafael Lobato.
The concluding race of the series was won by Edgar Florindo in his Seat Leon with Abreu second, ensuring a great end to his 2017 season which witnessed some very close races with five cars crossing the finish line in a 3 second window.

The 2017 Michelin Le Mans Cup, a European endurance series, now in its 2nd season concluded the championships six event season on Sunday at the Algarve International Circuit. The 2 hour long race is primarily for amateur drivers with the over all winners receiving an invitation to take part in the exclusive Le Mans 24 Hour Race next year. 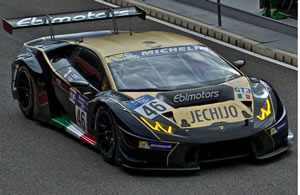 The no.46 Ebimotors Lamborghini of Emanuele Busnelli started from pole position, finishing ahead of Lee Mowie would ensure the GT3 title went to the Italians.

The drama started for them just 10 minutes into the race, when the Lamborghini went off at turn one in a cloud of smoke. On the next lap the front right tyre exploded forcing them to the pits for a new tyre. Meanwhile Lee Mowle took the lead in his Mercedes AMG GT3.

Ebimotors had to stop for seven minutes to replace the damaged front wing, dropping them down to a very distant 5th place.

The championship title looked to be headed to Lee Mowle but then in another dramatic twist the no.8 Lamborghini pitted with a problem promoting the no.46 Lamborghini to 4th place, enough for them to be crowned as 2017 Champions by just 2 points.

In LMP3 the no.3 DKR Engineering Norma was found to have a fuel problem at the final scrutineers rendering their hard fought victory void. The disappointment was short lived though as Jean Glorieux and Alexander Toril were crowned champions.
Pushing hard, Colin Noble in the no.79 Nielsen Racing Ligier was given a penalty for exceeding track limits allowing the no.98 Motorsport Ligier of Andy Meyrick through to claim the race victory. Noble managed to regain enough positions to secure 2nd in the championships by two points.

The final race of the afternoon was the 4 hours of Portimao. The concluding race to the Le Mans European Endurance series. 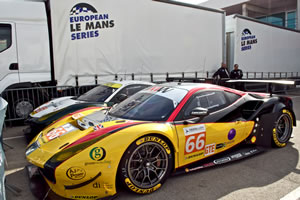 In the GTE class no fewer than 5 cars could take the title at the start of the race. As time wore on the attrition rate began to increase. First the 77 Proton Competition Porsche was clipped and spun by an LMP3 car whilst leading dropping him back.
The 55 Ferrari retired followed shortly after by the no51 Ferrari after a trip into the gravel.
With the championship leading no90 TF Sport Aston Martin unable to close the gap on the leading duo of the victorious No.77 Porsche, and the no.66 JMW Motorsport Ferrari 488 of Jody Fanin and Rob Smith, the newly crowned GTE champions.

A dominant display in LMP3 for United Autosports saw their no.2 and no.3 Ligier battle for the victory. The no.3 car of Christian England took the win, whilst the second place provided the American drivers of John Falb and Sean Rayhall with the 2017 ELMS title.

The LMP2 series saw a valiant display of driving by the Portuguese star Filipe Albuquerque wresting his no.32 United Autosports Ligier up to 2nd place with 5 minutes left. Not enough to win the title so wished for in the stands around the track though as the Russian teams no.22 G-Drive Racing Oreca needed to lower than 6th to relinquish their grasp on the title. The no.40 Oreca took line honours with no.22 following in 4th to become the ELMS 2017 champions. 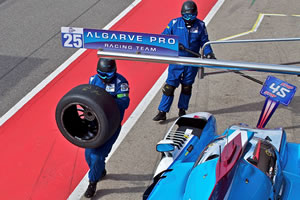 For the Algarve Pro Racing team what should have been an easy lead up to their home race turned into a difficult time. With just a few days to go the doctor announced that their driver would not be fit enough to race leaving team principal, Stewart Cox, a last minute search for a non existent replacement. Now with just the two drivers, American Matthew McMurry and Italian Andrea Pizzitola, the team were going well on track, challenging in the top places off of the podium when after 36 laps a technical issue led to the teams retirement.

A disappointing end to a difficult week. The good news though is they can try again next year as Portimao is on the 2018 calendar.

If all of these prototype cars were far too radical for you then this coming weekend the Autodrome will be hosting another fantastic racing spectacular with the Classic Car Series. Friday through Sunday, the racing includes pre 1966 Formula One's as well as a number of GT and historic classes with a bonus event, the Lotus 7's 60th birthday bash.