Lewis and Fisher to return to Vilamoura for Portugal Masters 2019

Defending champion Tom Lewis and history-maker Oliver Fisher have confirmed they will return to Dom Pedro Victoria Golf Course in Vilamoura for this year’s Portugal Masters, from October 24-27.
Lewis produced the biggest 54-hole comeback of the 2018 season to win the Portugal Masters for the second time, while Fisher made European Tour history as he carded the first ever 59 after a 12 under par round.

Lewis won this event in 2011, in just his third start as a professional golfer, with a 21 under par total, going one better in 2018, reaching 22 under par. He was nine strokes behind first-round leader Lucas Herbert, but carded rounds of 63-61-66 to finish three shots clear of Herbert and close rival Eddie Pepperell.

“I’m really excited to return to Dom Pedro Victoria,” said Lewis. “It’s a golf course which has been good to me, having won there twice in my career.”

Lewis climbed into the top 100 on the Official World Golf Ranking for the first time at the end of the 2018 season. After his win in Vilamoura, he finished the year with four top-15 finishes in his last six events.

He has maintained his position in the top 100 since, and will be looking to end the year on a high as he looks to start the 2020 season strongly on both sides of the Atlantic.

“The win in Portugal was a real turning point for me,” said Lewis. “It had been quite a few years since I’d won on the European Tour – my win on the Challenge Tour a couple of weeks before really helped; being in contention on Sunday didn’t feel strange and it gave me the confidence to go on and prove to myself that I could still compete and win at this level.”

“Even though it wasn’t the best of starts, something clicked on Friday and I knew there was a low score to be had out there after, especially after seeing what Oli (Fisher) achieved. When I hit the front on Sunday I didn’t look back and the feeling on the 18th green after clinching my second European Tour title was one I’ll remember for a long time.” 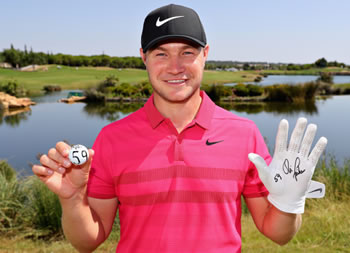 Also returning to Dom Pedro Victoria this year is history-maker Oliver Fisher, who carded the first 59 in European Tour history. Fisher recorded ten birdies and an eagle in a bogey-free 12 under par
effort to record the first sub-60 score in more than 690,000 rounds across the European Tour’s 46year history.

“I’ll never forget that day in Vilamoura,” said Fisher. “To have made history like that is something that can never be taken away from me, I’m still very proud of that achievement.

“I’m really looking forward to returning there in October. Hopefully I can rekindle those happy memories and finish my season strongly.”
“I’ll never forget that day in Vilamoura,” said Fisher. “To have made history like that is something that can never be taken away from me, I’m still very proud of that achievement.
Tickets for the Portugal Masters are available from €8 for juniors (ages 12-17), €17 for concessions and €20 for adults.
Season tickets are available for €24 for juniors, €50 for concessions and €60 for adults. To purchase tickets, click here.