Steven Brown claimed his first European Tour title with an incredible nerveless 66 under pressure at the Portugal Masters.
The Englishman entered the final regular event of the season at 150th on the Race to Dubai Rankings Presented by Rolex and needed a good week just to keep his playing privileges for 2020.

He started the final day at Dom Pedro Victoria Golf Course three shots off the lead after carding a season's best 65 in round three and revealed he was feeling relaxed in what he called a "win or bust" scenario.
After turning in 33, a birdie on the 11th put him into a position where he would keep his card and an eagle on the next had him at 17 under.
He then showed nerves of steel to par his way home and finish a shot clear of South African duo Brandon Stone and Justin Walters.
Walters finished second here in 2013 to keep hold of his card just weeks after the death of his mother and after sadly losing his father in the summer, he was runner up once again to keep his place on Tour as he moved up from 121st on the Race to Dubai Rankings Presented by Rolex.

The top 115 this week kept their cards and there was also joy for Jeunghun Wang and Jack Singh Brar who moved to the right side of the line, with Min Woo Lee, Niklas Lemke, Clément Sordet, Abraham Ancer and Lee Slattery dropping out.
Chilean Hugo Leon carded a closing 68 to finish at ten under but he was the man to agonisingly finish 116th.
Frenchman Adrien Saddier finished the week 15 under after a 66, one shot clear of England's Chris Paisley and two ahead of South Korean Wang and another Englishman in Eddie Pepperell.

Brown graduated from the European Challenge Tour in 2017 and came within a whisker of winning in his maiden campaign, losing out to Matt Wallace in a four man play-off at the Made in Denmark.
A tie for 11th at last week's Amundi Open de France represented his best finish of the season so far and he maintained that momentum to claim a first win and ensure his campaign will continue to the Turkish Airlines Open.
"You just never know with this game," he said. "It's crazy to think how well I've played the last month to how bad it was the first two thirds of the year. I never thought this was going to happen. I was just counting down ready for Tour School to get my game ready for that. 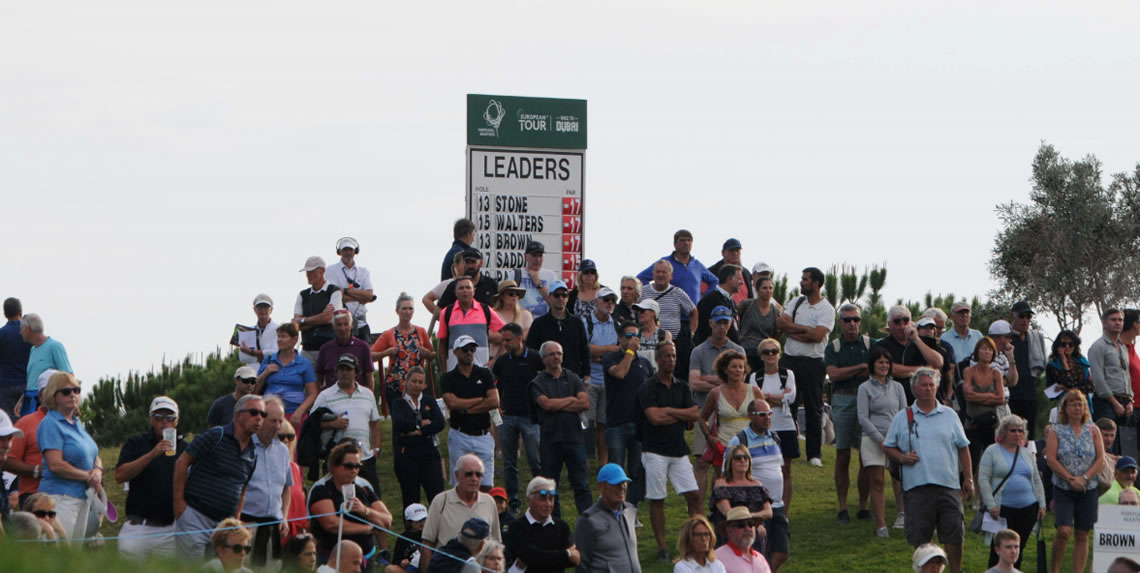 "The last few weeks I've had a calmness in my head. Even today, I liked the fact that I had to go for it and I wasn't just trying to have a good result. That's probably the difference.
"I went to Turkey as first reserve last year and didn't get to play so it'll be nice to turn up and actually be in the field this year."
Stone started the day with a two shot lead and played a wonderful bunker shot on the second for a birdie before hitting a stunning approach into the third to move three ahead.
Another gain as he got up and down from a bunker on the par five fifth moved Stone to 18 under but he missed the green at the sixth for a bogey as Walters made his move.
He turned in 32 as he took advantage of the fifth, holed from 12 feet on the seventh and made a tricky left to righter on the ninth.
The 39-year-old then found himself in sand off the tee at the tenth but played a wonderful second for another gain and was within two.

Brown had birdied the second from five feet and holed a 25 foot left to righter on the ninth to turn in 33 but at that point he was still three back.

Stone holed a long putt on the tenth to hold a three shot lead but Walters took advantage of the par five 12th and then birdied the 14th to trim the lead to one.
A tap-in at the 11th edged Brown closer before he put a stunning second at the 12th to five feet for an eagle and he was alongside Walters.
A Stone bogey on the 13th made it a three way tie at the top and Walters three putted the 16th before making the most of the par five 17th and bogeying the last.
Stone three putted the 16th to hand Brown the lead and the 32-year-old kept his head to par his way home.
Wang carded a 69 to move up from 119th on the Race to Dubai Rankings Presented by Rolex, while Singh Brar recorded a closing 66 to get to 12 under and move up from 117th.
Anton Karlsson made the 27th hole-in-one of the season as he holed a five iron from 197 yards.