Portimão Basketball Team Is On The Up!

Marcus Patterson is a 6’4, 25 year old basketball player from the Bronx, New York. Recently awarded with 2 awards for the 2019-2020 season by Eurobasket.com, he arrived in the Algarve in September 2019 and is the starting American shooting guard for Portimonense SC.

"It’s my first year playing for the club and my first time being in Portugal. Being a pro overseas, there’s so much free time! My favorite place, other than the gym, is Algar Seco, Carvoeiro, the Algarve is like paradise, I’ve never seen anything like it. It’s beautiful and refreshing. I explored and met great people in Algarve. The food is great too! I literally enjoyed my entire time with no complaints other than the excessive staring, and that wasn’t because of my height, it was because of my pantufa I wore everyday. Yes, I learned a few words! Haha." 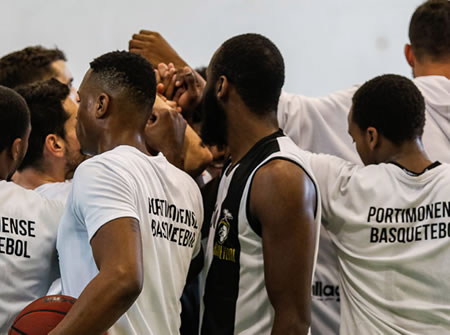 "I lead the team in points, rebounds, steals, free throw percentage, and minutes played. I was ranked 3rd in the league in scoring, 11th in rebounding, 4th in minutes played, and I finished 7th for MVP. I averaged 22 points per game, 9 rebounds per game and 2 steals per game.

For the team, we had a good group of guys. Most guys were new to the team, including myself so we struggled in the beginning of the season with chemistry. We were losing games by silly mistakes and small details. We were all trying to figure out our identity as a team and what simply worked for us. Obviously, it’s normal to struggle in a team sport with lack of chemistry but I sure do hate losing. There were nights I couldn’t sleep because I thinking of ways, on how to be better. I was obsessed and watching film and making sure I was doing everything possible to win. I made sure to have the right relationship with my coach Carlos Almeida and asked him many questions and suggested different approaches to the game. We both respected each other opinion and that helped my transition as a player a lot.

I give credit to the coaching staff and my teammates for trusting the process and buying into our coaches plan.

During January, we started to find our team identity and begun to win more games. We were gaining more confidence as a team and key players such as our captain Pedro Almeida and Armando Francisco really stepped up big in key moments. Everything was clicking, until Covid-19 happened and slowed things down which forces me to head back home early. The team allowed me to head back home early during the pandemic to be with my family. The season was only cancelled indefinitely. The team and I remained positive that we could resume our season. If it had resumed, I would’ve gone back to continue the season. Unfortunately COVID-19 is much worse. The league officially cancelled the season.

We were tied for the 8th spot in the playoffs in the South Zone with an advantage over the the 9th seed by a few points because we had beaten them before. We had 5 games left of the season and it was against teams we already had played and beaten before. So as a group we were confident to finish the season and secure a playoff spot.

The season is over now and you never really know how things would turn out. However, I’m sure ever Organization goal is to move up to the higher league and Portimonense basketball is definitely in the right direction.

In terms of my future with Portimonense, it is uncertain for the 2020-2021 season. For me It has been an absolute honor to wear a Portimonense uniform and represent a great city and it’s people!"