Football is a beautiful game with beautiful scenes. Football players, on the other hand, work hard and, in the process, create some unforgettable memories for their fans. They set and break records and almost literally perform miracles on the football pitch. In this article, we recount some of the most historical plays recorded in the football field.

Most Goals in a Year

In 2012, Lionel Messi scored an astounding 91 goals, making the highest number of goals in a calendar year. With this astonishing record, he set a club record for Barcelona by scoring five goals in a Champions League match. The world of sports, especially football, is exciting. If you want to access the latest and most informative news, you can visit https://ronaldo.com/, and you will not be disappointed. You will get access to the latest, most exciting news, all in one place. Whether you are looking for football history or the most recent sports news, this is the place to be.

You may be tempted to believe that this title belongs to some of the 21st century’s most beautiful, Ronaldo or Messi. However, this is as far from the truth as it can get. The person who scored hat-tricks five times consecutively- Stjepan Lucijanic of Croatia holds this record. In total, he scored 20 goals in the five games. His new record overtook Masashija Nakayamu’s record, who had scored four consecutive hat tricks with 16 goals to his name. This was not the only historical thing that this Japanese player did. He was also the first Japanese football player to score for his country in the 1998 Olympics. However, they lost their opening match to Jamaica.

If you are a fan of Messi or Ronaldo, it may be satisfying to know that these two hold the record for most hat tricks in one season of La Liga. They have both been able to score eight hat tricks in a single season.

The Longest Game Ever Played 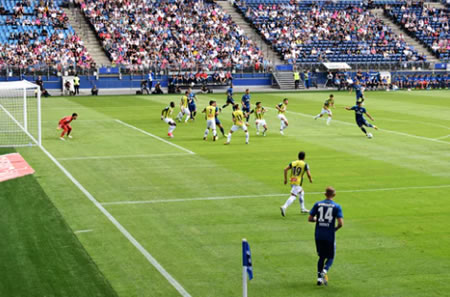 A standard football match should be played for approximately 90 minutes. However, the record for the longest game ever played goes to Heartbeat United. This game lasted an astonishing 108 hours. This happened in May 2016 when Heartbeat United, an amateur team, split into two groups, each with 18 players rotating into the field. Now that it was played for 106 hours, you can imagine that the match lasted days. It started at 6 am on Thursday and ran through the weekend into Monday.

You may be wondering why these players decided to play this kind of match. The match was for charity after three local players lost their lives-two in an airshow disaster, and one had suffered a heart attack in the years prior. The noble act led to proceeds that were split between the players’ memorial fund and the British Heart Foundation. If you were wondering how many goals were scored, you would be glad to know that it was 1009-874.

Most Goals in a Single World Cup

By now, you know that football is purely a game of numbers. Talking of numbers, Just Fontaine, a French national, scored 13 goals for his team in 1958. They finished in third place. The 13 goals were spread out like this: a hat-trick in the opening game, two goals against Yugoslavia, a goal against Yugoslavia, two goals against Northern Ireland, one against Brazil, and four more to make it a total of 13 goals. If you are wondering about Ronaldo and Messi, none of them has ever broken this record. In another league, La Liga, Agustin Sauto Arana, and Lazslo Kubala have scored seven goals in a game. Ronaldo almost beat the record but has only managed five goals in one game, twice while Messi has come in at a close 4.

Fastest and Most Powerful Shot

Zlatan is good with his shots, but not even this outstanding player could beat the record of Sporting Lisbon’s defender Ronny whose shot measured an astounding 221 kilometers per hour. This is not only fast and powerful but scary to even think about.

There is a record for the most hat-tricks, but the fastest hat-trick would also count. The fastest hat trick was recorded at the Sheffield Sunday League in England. Alex Rorr, Rawson Spring forward and science student, scored a hat trick in an astonishing within the first 12 minutes and 10 seconds of his team’s match against Winn Gardens. This record is undoubtedly something worthwhile for a player of the Sheffield Sunday League as it puts the league on the world map.

Football matches are a beautiful way for players and fans to create memories. The six instances highlighted above are some of the most memorable ones in football history. Read, enjoy, and share with your friends.