Why is the World Cup in Qatar?

As the build up to this month's World Cup continues, the highlighting of human rights issues in Qatar is dominating the global press.

We also have the hiatus of domestic European league competitions to accommodate a mid-winter World Cup playing havoc with local football schedules. So let us re-visit why the World Cup, potentially watched by half the world's population on Final day, is in Qatar in the first place - after all,  it's not known for its footballing culture..

Countries bid to host the World Cup, with commitments made re stadia, players, fans, media rights, and of course paying fees to FIFA. Yes FIFA, mired in corruption for decades, like the International Olympic Committee in the good old days, where the bidding processes was more the focus on the voting delegates and the gift-bearing visits than the merits of the World Cup Venue. 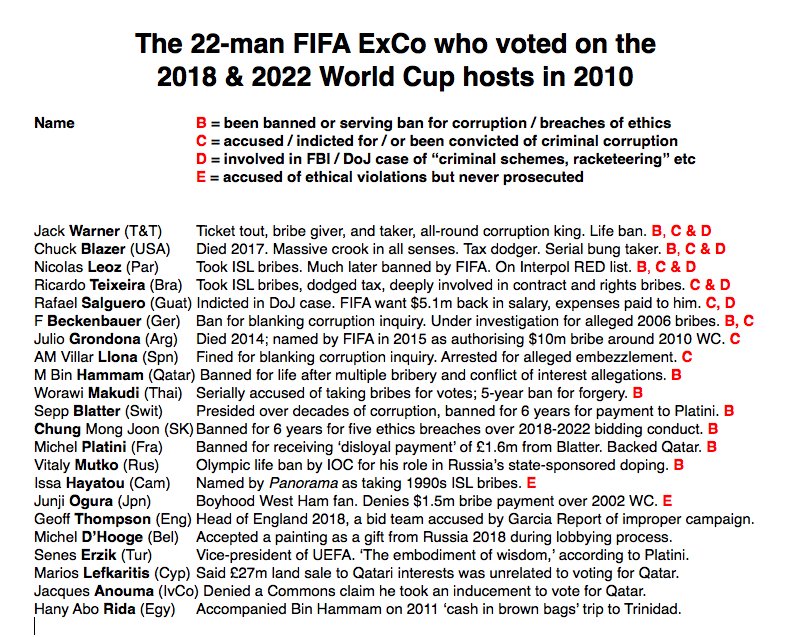 FIFA has 22 delegates from all regions of the World - the Americas ("CONCACAF & COMMEBOL").

Unusually, FIFA decided to host 2 bidding processes at the same time? Bidding started in 2009, with Blatter already under much pressure re allegations of bribes. His predecessor, Joao Havelange of Brazil, (also an IOC member), was exposed in July 2012 by a Swiss prosecutor as having received, with his son-in-law Ricard Teixeria, 41 million Swiss Francs in bribes connected to awarding World Cup marketing rights... Teixeria was the head of the Brazilian Federation for this voting cycle, yet at the time commercial bribery was not a crime in Switzerland. Rumours abounded that holding 2 bids in one go was Blatter's way of enriching all his circle before the final whistle went on corruption.

For 2018, there were 4 bids - Belgium & Netherlands, England, Russia, and Portugal & Spain. For 2022, Australia, Japan, South Korea, USA, and Qatar. Nigeria and French Polynesia were banned from voting following allegations that they would accept money in exchange for votes. That left 22 voting members...

Blatter announced in December 2010 that the committee had decided to "go to new lands", with Russia and Qatar the winners... Qatar!!! Both countries bids received the most votes at every round of voting. Qatar!!!

Immediately, allegations of vote-buying emerged - ESPN published allegations linking Qatar's successful bid to Football Dreams, a youth development program that channeled money from the Qatari government to football programs in 15 countries in sub-Saharan Africa, Latin America and Southeast Asia ­ six of which had representatives on the FIFA executive committee.

England 2018 bid chief Lord Treisman told a Parliament committee that four FIFA committee members approached him asking for various things in exchange for votes. Among the accused were FIFA Vice President Jack Warner (Trinidad & Tobago), who asked for £2.5 million to be used for projects, and Nicolás Leoz (CONMEBOL), who allegedly asked to be knighted. The Sunday Times further reported that month that Issa Hayatou

(Cameroon) and Jacques Anouma (Ivory Coast) were given $1.5 million in exchange for their votes in favor of Qatar. A leaked email from FIFA General Secretary Jérôme Valcke suggested that Qatar had "bought" the rights to host the 2022 FIFA World Cup.

In May 2015, as FIFA members gathered in Zürich for the 65th FIFA Congress, U.S. federal prosecutors disclosed cases of corruption leading to the arrest of seven a dawn at the luxurious Hotel Baur au Lac (a FIFA Executive Committee hangout). More than 40 individuals were indicted, including 2018 and 2022 voters Luis Bedoya, Chuck Blazer, Nicolás Leoz, Rafael Salguero, Ricardo Teixeira, and Jack Warner. The resulting cases led FIFA to suspend many members, including Issa Hayatou, and the end of Sepp Blatter's presidency of the organization.

In April 2020, the United States Department of Justice indicted voters Nicolás Leoz, Ricardo Teixeira, Julio Grondona of Argentina, and Jack Warner. The indictments spelled out how shell corporations and sham consulting contracts were used to pay voters between $1–5 million for their support. Other voters who had previously pleaded guilty to accepting bribes, including Rafael Salguero of Guatemala, aided in the indictments, which when included with previous cases, mean that more than half of the voters were accused of wrongdoing related to their votes. Voter Franz Beckenbauer has also been accused by Swiss prosecutors of embezzlement and money laundering related to voting in the 2006 FIFA World Cup host selection, while Ángel María Villar was arrested in July 2017 for embezzlement, after previously being fined for failure to cooperate with investigations into vote-buying in the 2018 and 2022 host selection.

This unnamed author lived in Nyon for 10 years - Swiss home to UEFA. The word on the street there was that Qatar paid almost $2 billion to get the World Cup rights. In December 2015, Platini and Blatter were both found guilty of ethics violations and barred from football until 2023.

Platini's son, Laurent, started working for Qatar Sports Investments, an arm of the Qatari government and owners of Paris Saint-Germain, in November 2011.

And the Russian FIFA delegate, Vitaly Mutko, who famously charged for 97 breakfasts (€ 4,000) during a 20 day Canadian stay at the Vancouver winter olympics. The World Anti-Doping Agency accused Mutko of overseeing a wide-ranging, doping scheme within Russian track and field. In December 2017, the International Olympic Committee (IOC) banned Mutko for life from future Olympic Games for his role in the doping conspiracy. The Court of Arbitration for Sport however lifted it in July 2019, after he appealed.

Sepp Blatter was born in Visp, Switzerland. The new FIFA President, Gianni Infantino, was born in Brig, Switzerland - 10 kilometres away. The king is dead, long live the king!!