Jagger began writing the song back in April and has raced past customary music industry lengthy launch schedules to release it while it still reflects the political context which inspired it.

‘England Lost’ is a cry of anxiety about an inward-turning Britain and the unpredictable political situation created by the referendum vote to leave the European Community.

Accompanied by a blues-rock guitar riff, Jagger almost spits out his angry rap lines: “Had a girl in Lisbon, a girl in Rome/Now I’ll have to stay at home,” he sings with poignant pessimism.

The narrator in ‘England Lost’ is a football fan and financial community gent, in despair that his country has lost ‘the match’.

In the black and white video which accompanies the song’s release, this character is played by the Welsh actor Luke Evans who, fleeing his City of London office in his three-piece suit, sprints through the English countryside towards the south coast. Along his flight he encounters a series of menacing figures, some of whom appear to be dressed uncannily like Nigel Farage.

When he reaches the English Channel, he is dragged back from the surf – and from either drowning or freedom - by a crowd of Kafkaesque city characters, while a little girl remarks, “where did you think you can go? Pull yourself together!”

In Jagger’s version of our reality, no ‘adult’ will be permitted to escape from isolationism. “I think I’m losing my imagination/ I’m tired of talking about immigration/ You can’t get in and you can’t get out/ I guess that’s what it’s really all about, ” he sings.

‘England Lost’ was released at the same time as ‘Gotta Get a Grip’, a song about fake news and politics, led by what Jagger refers to as ‘lunatics’, which seems to be more about America than Britain.

I cannot hide the fact that, like for many people of my generation - I’m the new 42, by the way - Mick Jagger remains not only a star but an icon of a more tolerant and creative Britain. 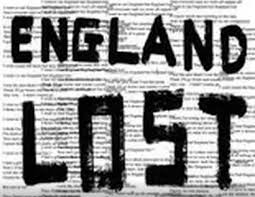