Popping the cork at Windsor 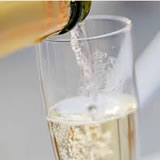 Lovers of champagne (woops, I mean sparkling wine), are awaiting the release this autumn of the Windsor Vineyard 2014 vintage with the febrility of a champagne cork about to be popped.

I am not in a position to disclose the exact date of this release but, if you are interested in tasting the royal bubbly, you should move fast as last year the 2013 vintage sold out weeks before Christmas.

Windsor Vineyard is made from vines planted in Windsor Great Park in 2011. Windsor Great Park belongs to the Crown and could be called the Queen’s back garden. The Royal Family does not however own the vineyard which is the property of Laithwaites, the world’s largest wine mail order company and a major player in the UK wine trade.

The Duke of Edinburgh is the official Park Ranger, where he has rather idiosyncratically imposed a speed limit of 38 mph, and has taken a special interest in the project, with an eye perhaps to selling the ‘royal fizz’ in the Windsor Farm Shop, the grocery store which sells produce from the royal estate as well as from other ‘small local businesses’.

Last year’s vintage did extremely well at blind wine trade tastings, when it was tasted alongside ‘real’ French Champagne. The Financial Times wine writer, Jancis Robinson, who incidentally is a member of the Royal Household Wine Committee, for instance swears by Windsor Vineyard, so we should expect to see it popping up at state banquets in the near future.

The wine itself is made from the classic grape varieties used in making Champagne - Chardonnay, Pinot Noir and Meunier – and made at Ridgeview’s Winery in Sussex. The ‘royal fizz’ is part of a recent trend for English wine growing, in which sparkling wine predominates. I can’t help thinking how much the Queen Mother would have enjoyed having a domestic supplier for one of her favourite tipples!

Although the English climate is much derided, there have been other periods in the past when this climate has permitted wine growing. The Romans succeeded in growing vines as far north as Hadrian’s Wall, although I very much doubt that they would have found favour with a Waitrose buyer. They were however enjoyed by the Roman troops. There was also a warmer medieval period when the Queen’s ancestor, Henry II, planted vineyards in Windsor Great Park - this was long before sparkling wine however!