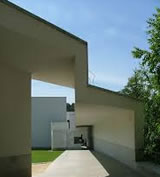 We shall see in due course whether the spectacular new MAAT (Museum of Art, Architecture and Technology), the elegant vessel on the banks of the River Tagus in Lisbon, will become Portugal’s leading contemporary art museum. For the time being, this position is uncontestably held by the Serralves Foundation. It is no coincidence that the Foundation is located in the country’s most exciting city: Porto.

The Foundation’s permanent collection of contemporary works from the 1960s onwards, by both Portuguese and international artists, is housed in a sleek white building designed by Pritzker Prize winner Alvaro Siza Vieira, a leading figure in the modernist architectural movement known as the ‘School of Porto’.

A changing exhibition of trees

Siza Vieira’s exhibition spaces flow into each other with effortless fluidity as we move from one level to another along a series of gentle ramps that create a graceful spatial dynamic. The walls are punctuated by enormous windows that allow natural light to pour into the galleries. The fluctuating quality of this light charges the museum space with energy, bringing it to life. As we stroll along the galleries we are able to look through these windows at an ‘exhibition’ of magnificent mature trees in the garden outside. Each window ‘frames’ a perfect natural composition in a palette of greens, constantly modified by the changing light and seasons. The forms of these works created by nature evolve as we walk slowly past the windows and our perspective changes. This is a humbling experience and a reminder that only great art can rival nature. Perhaps it presents a challenge for the museum’s curators when choosing works to exhibit.

A British artist who paints like a writer of fiction

On a recent visit to the Foundation Serralves, I found that at least one of the work’s being shown did level up to nature’s high standards. This was an oil on canvas painted by the British artist Lynette Yiadom-Boakye in 2015 and titled ‘4am Friday’. The work is a large and imposing portrait of a black man who is sitting cross-legged and wearing a striped T-shirt. The man challenges the viewer with his self-assured gaze. Frequently inspired by dancers, Yiadom-Boakye’s models are, however, rarely individuals who really exist and are more like the pictorial equivalent of the fictional characters created by a writer.

A further satisfying feature of these galleries are the museum’s guardians! Dressed with formal simplicity in black suits with white shirts, they sit, as you would expect, at the entrance to the different rooms or stand against walls. The fun begins though when they start to move, setting in motion an unscripted choreography. Each guard with his or her individual profile and corpulence, charts a course across the sea that is the gallery’s floor. We do not know to which port they are destined nor what they will encounter along their route, we can only enjoy the ballet created by their movements.

The large garden surrounding the Foundation Serralves is a soothing space in this vibrant city and one which offers the advantage of plenty of shade. It was originally the private garden of the Villa Serralves, often considered Portugal’s most notable example of Art Deco architecture. The Villa was designed and built between 1925 and 1944 by the French architect Charles Siclis and his Portuguese colleague José Marques da Silva, who was equally responsible for Porto’s Sao Bento railway station. The Villa was commissioned by Carlos Alberto Cabral, the second Count of Vizela and the heir to a textile fortune.

Cabral had been inspired by a visit to the seminal International Exhibition of Modern Industrial and Decorative Arts, held in Paris in 1925, and the Villa included work by major figures such as René Lalique and Jacques Emile Ruhlmann, who designed the furnishings for the dining room. The garden is designed as if it were a series of rooms in an architectural project – fortunately its Art Deco integrity has been wonderfully preserved.