A campaign that is raising concerns about planned oil exploration off the Algarve coast has been supported by a donation from a British wildlife holiday company.

A group from Honeyguide Wildlife Holidays has donated £500 (€550) to SPEA, Sociedade Portuguesa para o Estudo das Aves. SPEA is part of the coalition Plataforma Algarve Livre de Petróleo (Platform for an Algarve Free of Petroleum) that is campaigning against oil and gas exploration in the region.

The money from the Honeyguide group, which was in Algarve in November 2017, has gone towards SPEA’s legal costs when the issue recently came before a court in Loulé.

SPEA and PALP are concerned that the area earmarked for offshore oil exploration, about 46.5 kilometres from the coast at Aljezur, is adjacent to the Costa Sudoeste Special Area for Conservation (SAC). There is a concentration of harbour porpoises and bottlenose dolphins in this area. Cetaceans (whales, dolphins & porpoises) are known to be highly sensitive to noise at sea, such as drilling, as it interferes with their communication and echo-location.

There also is a migration flyway here for the threatened Balearic shearwater and the northern gannet.

Many of the gannets are likely to nest in the United Kingdom, adding weight to the international links and support. 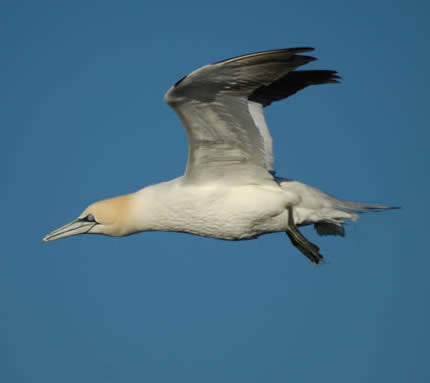 PALP/SPEA have protested that no environmental impact assessment has been prepared. They also stress that reliance on fossil fuels is a backward step at a time when investment should be focussed on increasing more sustainable power sources such as solar energy.

The birdwatching and wildlife group from Honeyguide Wildlife Holidays, which is based in Norwich, England, made the donation while on a visit to the Algarve and Alentejo regions in November.

Domingos Leitão, Executive Director of SPEA, said: “The risks of an accidental oil spill are obvious and very worrying, for wildlife at sea, the Algarve coastline and for the people and tourism businesses that depend on the coast’s natural treasures.”

Mr Leitão continued: “Protecting nature costs money so to have this support from our friends at Honeyguide is very welcome. This international link also reminds us that wildlife does not recognise national borders, especially so for the precious marine environment.”

Honeyguide proprietor Chris Durdin said that all Honeyguide holidays include a conservation donation as part of the price of the holiday.

“We always contribute to the protection of the wildlife that we come to Portugal to enjoy, and have an established long-running partnership with SPEA in Portugal,” he said.

“We have seen the damage to wildlife and coastal communities in the UK from oil pollution, and are pleased to add our support to push for environmental safeguards in Portugal,” added Durdin.

0 #1 OMG 2018-01-26 09:02
"Greenwashing"?
Guess Honeyguide is not aware that SPEA receives funds & other support from GALP ... the same company that SPEA is allegedly fighting to protect the birding environment ...