Spain has been warned of the early arrival of lethal caterpillars due to a mild, dry winter similar to the one in Portugal.

The Pine Processionary Caterpillar (Thaumetopoea Pityocampa) poses a danger to children, dogs and some adults.

The mild winter has meant that “the population of processionary caterpillars has flourished and brought forward their arrival,” according to Spain’s Pest Control Association.

But it is already known that February to April is a time of danger.

Information from the UK Government Forestry website explains: “PPM caterpillars represent a public health hazard because they have thousands of hairs which contain an urticating, or irritating, protein called thaumetopoein. These hairs can be blown by the wind into contact with people and animals, resulting in painful skin irritations and rashes and, in some cases, allergic reactions in some people and animals.

The eggs lie in nests in pine trees until they hatch. The young caterpillars then reach the ground and move head to tail in a procession.

Each caterpillar measures between three and four centimetres long and is covered with tiny barbed hairs which contain the thaumetopoein protein.

Dogs, or cats, could pick up these hairs on their paws. The irritation caused tempts them to lick their paws, spreading the poison to the tongue and mouth.

They are likely to suffer allergic shock, breathing difficulties, vomiting or foaming at the mouth and should be taken urgently to the nearest veterinary clinic.

Dog walkers and minders of small children are advised to avoid places where pine trees grow, including municipal parks, private gardens and roadsides. 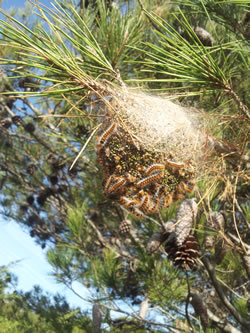 +3 #1 Peter Booker 2016-02-09 21:09
Our Daisy picked up some hairy caterpillar last Tuesday. We took her to the Inemvet hospital in Olhão and they did a wonderful job at picking out of her sedated mouth the hairs stuck in her tongue. The dog is now virtually back to normal, but still on the pills. The staff at Inemvet really know what they are doing.

Needless to say, we have had a cremation ceremony with the caterpillars.
Refresh comments list