A new survey of one of Portugal’s most threatened birds is being supported with funds by a British wildlife holiday group.

The little bustard – 'Sisão' in Portuguese – is declining in Portugal and Spain. It’s a bird of steppes and low intensity arable cultivations, with a key breeding population in Alentejo.

Reasons for the little bustard’s decline are unclear, and a coalition of nature conservation groups is undertaking a survey this year as part of efforts to tackle the decline. 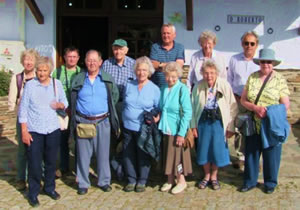 This is part of Honeyguide’s regular support for SPEA through its holidays in Portugal. Last year there was another donation of 1000 euros towards SPEA's campaign against the illegal trapping of wild birds.

The second National Little Bustard Survey is underway in April and May this year, with counts in 57 sampling areas and 1695 sampling points. This project is running in coordination with a similar survey in Spain.

The first survey of little bustard breeding population in Portugal was in 2006, when a total of 17,500 displaying males was estimated. 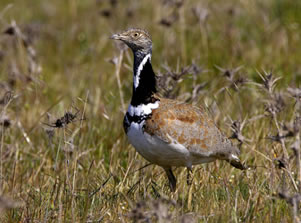 This work is being developed by a taskforce of six organisations (InBio Lisboa, ICNF, SPEA, LPN, LabOr and Quercus). SPEA is responsible for 15 per cent of the field work, and it is this element that Honeyguide Wildlife Holidays is funding. Results of the survey will be announced later this year.

Honeyguide proprietor Chris Durdin said that all Honeyguide holidays include a conservation donation as part of the price of the holiday.

“We always contribute to the protection of the wildlife that we come to Portugal to enjoy, and this continues our long-running partnership with SPEA in Portugal. We are very pleased to support the little bustard survey and hope it helps to safeguard this beautiful bird in Portugal,” he said.

Domingos Leitão from SPEA said: “The little bustard is defined as a Globally Endangered species and the Portuguese population is Globally Important. Knowing where bustards are breeding now, and how that has changed since the last survey in 2006, is a vital part of understanding and conserving this special bird.”

This donation brings the total given to SPEA since the first Honeyguide holiday in mainland Portugal in 2005 to £5,782. The total for conservation contributions from all Honeyguide holidays passed £100,000 during 2015 and now stands at £106,386.

This survey of little bustards is part of a wider Breeding Bird Atlas in Portugal. More information HERE.
More about Little Bustard in Portugal HERE.

Honeyguide’s annual holiday in mainland Portugal moves between different parts of Portugal. In May 2016, the group was in Douro Internacional and Montesinho Natural Parks in northeast Portugal. In 2015, it was in Algarve & Alentejo, based in Alte and Vila do Bispo, and previously it was in Central Portugal, based near Santarem and Marvão.

Honeyguide Wildlife Holidays is exceptional among wildlife holiday companies as it has a Charitable Trust through which its donations to conservation projects are passed to local conservation organisations.