"In an ideal world the words tolerance, solidarity and charity would not exist," says Tela Leão. If we instinctively treated each other with trust and respect we should not need those insulting and patronising words. Developing this concept, her friends José and Raquel Martins of Casa das Artes in Tavira decided to launch a project based on an idea by the Swiss artist Doris Sanders (and her Portuguese husband António Almeida) to generate Tavira Ilimitada - Against Racism and Xenophobia.

This civic movement was born in March 2011 and has involved over 30 associations and promoted dozens of events in the Tavira area and has created enough momentum to carry the project forward into 2012.

Tela was immediately drawn to the fresh ideas around Tavira Ilimitada.  Analysing the population statistics of Tavira she found to her surprise that:  of the 450 000 or so foreigners registered as resident in Portugal, more than 72 000 live in the Algarve; and of the total of 25 000 residents in Tavira county, there are 3 500 foreign citizens from about 60 different countries. Tavira Ilimitada attracted a strong and positive response from the many different cultural organisations within the community and its program grew to include scientific, literary and political conferences; art exhibitions; various performances and social events.  One of the longer term benefits of this involvement of foreign groups was to create lasting working relationships between individuals and organisations from different communities.  It is certainly the case that we have made more contacts throughTavira Ilimitada for Algarve History Association than ever before.

So what is Tela doing in Tavira and why is Tavira Ilimitada so close to her heart?  She herself is a Brazilian immigrant who arrived in Portugal in 1991 as her then husband found work in the film industry of Lisbon. In spite of the fact that her mother tongue is Portuguese, it is a fact that she feels as much an immigrant as any non-Portuguese speaker. She knows through her experience that culture is the best means to draw together people of various backgrounds and she is determined to create of a more trusting and cooperative community through cultural integration.

Tela Leão is her everyday name which is much easier to use than her full name, Auristela Maria Lopes de Miranda Leão, a grand Sunday name. As a child in São Paulo, Tela trained in piano, architecture and literary translation. She spent time in the US as an exchange scholar, and still treasures the ties she formed with her American family in Connecticut and is fluent in English and also Spanish. Her two children have followed her artistic leaning; Ana Luisa is a choreographer in Toronto, and Vinicius is working in the film industry in Granada. Tela´s first marriage to a Brazilian writer ended after their move to Portugal, and she is now happily settled with Rudy Engelander, a Dutch playwright and lecturer on theatre. 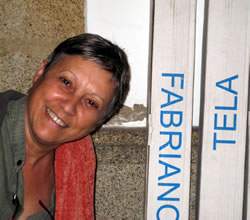 During her working life she has been actress, film producer and film director´s assistant. For 20 years in São Paulo she made films, budgeted, worked with government agencies, wrote screenplays, developed projects for corporate sponsorships and produced advertising, an exhilarating part of her life.   In 1991 she came to Portugal as an executive producer to control the budgets and casting of advertising films.  Later she became a producer in her own right in both Lisbon and Porto. The work in which she has most pride was the coordination of the cultural programme of the 134 countries involved in Expo98 Lisbon (except the Portuguese speaking ones, that were coordinated by a Portuguese colleague) and the formulation of a thematic framework for each of the participating countries. After her involvement with Expo 98 she was a consultant for European street theatre in Oman and cultural events director for the Portuguese contribution to Expo 2000 in Hanover and Expo 2008 in Zaragoza. She is a member of APGC (the Portuguese Association for Cultural Management) and of the Ibero-American network for culture and creativity and of the list of cultural experts for the organisation EACEA (Education, Audiovisual and Culture Executive Agency).  Tela´s long career in cultural activities and cultural programming has endowed her with an astonishing range of contacts.

Tela made her debut in the Algarve as Assistant to the first General Commissioner for Faro, Capital da Cultura 2005 Tela worked as cultural programmer for the centenary celebrations of the Portuguese Republic in 2010.  She and Rudy are now settled in Tavira.

Tela´s passion for integration and culture is leading her to work with many different ways and to think laterally and quickly.  At present she is developing ideas with the German owned Quinta da Arte near Tavira to relate art with science while integrating students of visual arts from the University of the Algarve into the project.  The Science Department of the Gulbenkian Foundation may be able to contribute but even the fabulously wealthy Gulbenkian Foundation has limits to the availability of its sponsorship.

The development of more musical events in Tavira and the promotion of local groups to ensure their survival are projects for the coming year and her target is to organise one concert per week.  She shares the concern of many of the visitors to and inhabitants of Tavira that there is little cultural dynamism in the city that has Vive Cultura as its motto. Hotel staff have told her of guests who expect at least some of the 27 churches in Tavira to be open whereas they are normally closed.  She thinks it would be possible for the city to create a corpus of volunteers who could show visitors around and to promote a list of times when these churches would be open.  Nor would it take much effort to use the talents of the people of all nationalities within easy reach of Tavira to create a much more dynamic multicultural community with a wide range of activities.

Tela will remain in Tavira for the foreseeable future, and she certainly has plans for the immigrant communities. "When there is a downturn in the economy then culture is one of the first things to be cut which is a pity because it is culture that provides inspiration and dynamism to take communities forward."

Clearly Tela will be doing what she can in concert with the associations in Tavira to keep creativity alive.