"I woke up at 4.30 am with a sudden flash of inspiration.  If there is no hospice here in the Algarve why can´t we just make it happen?" said Alison Blair.  And that was the beginning of the charity association Madrugada.

'Madrugada' is Portuguese for daybreak and new beginnings and Alison´s early morning inspiration is already changing the way in which the terminally ill are cared for in the Algarve.

Planning a partial retirement, Alison had arrived in the Algarve in September 2006.  Because she wanted to continue her work in psychotherapy, she arranged to work on two days every week at the Clínico Pacífico in Albufeira.  Whilst there, she was approached by a patient who was terminally ill and who needed psychological support.  At that point Alison realised there was no hospice for the terminally ill in the Algarve nor was there any equivalent of district nursing.  What Alison did was contact her patient´s friends to arrange a twenty-four hour rota for care in the home.  None of these friends had ever worked in palliative care but what they lacked in experience they made up for in terms of commitment and a genuine concern to support their friend. "What people need at the end of their lives often comes down to three things:  the physical relief from pain, psychological support to alleviate emotional distress and a spiritual need to make sense of their lives and come to terms with death and dying, this is known in Palliative Care as the treatment of Total Pain," said Alison.

On 25 February 2009, Alison, assisted by friends, held an open meeting at the restaurant Forteleza in Praia da Luz to discuss a new approach to helping people and their families cope with life limiting illnesses.  Alison had expected to sell a few raffle tickets to the few people who would turn up for lunch, but in the event over 70 attended.  Not only did they have lunch and buy raffle tickets, but they also wanted to volunteer.  Her idea had very quickly captured the hearts and minds of her audience.  Alison then found herself on a steep learning curve as she began to deal with the leadership and management of a medium sized organisation. She first turned to the famous St Christopher´s Hospice in Sydenham for advice about palliative care and then also took courses in fundraising and on the management of volunteers. 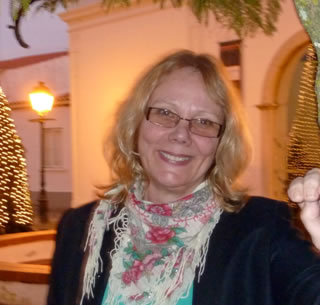 Her method of reaching out to the communities in the Algarve is in the form of charity shops. There are two Madrugada charity shops at present, one in Praia da Luz and the other in Portimão. The third will open shortly in Almancil and it will specialise in high-end second-hand ladies' fashions and acccessories.  These shops are staffed by teams of volunteers and as more shops are opened further teams of volunteers will be needed.  During the current economic crisis, raising funds is not as easy as it has been in the past, and so Madrugada needs to adopt a lateral approach.  Already Madrugada patron Sir Cliff Richard has raised over €20,000 at the Ria Park hotel in Vale do Lobo (this money was split between Madrugada and ACCA Kids, the charity which helps underprivileged children).   There have been fund raising dinners, and Alison herself has recorded a jazz CD called 'Blonde Moments' which is available in return for a donation to Madrugada.  Supporters Mo Miller and Jenny Leeder have come up with their own tasty way of making money - Madrugadalicious! This is an idea which anyone can take up; organise a lunch, afternoon tea, or dinner where each guest makes a donation of €10 to Madrugada. There have also been sponsored walks, a visit to Morocco, fashion shows and sponsored swims.  What could you come up with for a cause that is close to everyone´s heart? Alison is open to receive any other ideas for fund raising.

Although an essential underlying objective was to ensure that the resources and expertise of Madrugada would be available to everybody in need, whether Portuguese or estrangeiros, Alison recognises that the Project will succeed only if is supported in the long term by as many people as possible.  Only then will Madrugada be able to finance the construction of a hospice, to fund the day centre which is due to open shortly in Praia da Luz and to pay for medical support.  The initial support services have been established in Praia da Luz because that is where Alison has her base, but in the longer term she envisages the establishment of further Day Centres in Central and Eastern Algarve.

Already Madrugada has helped ten individuals and their families and carers with support in the last weeks and months of their lives. "Forget all the rules of counselling" Alison said,"we do hug our patients and their families! And we cry." The organisation has also dealt with many other families and referrals.  She is very optimistic about the Day Centre in Luz where one-to-one and group therapy is planned and there will be opportunities for physical, spiritual and psychological support for patients from the time of diagnosis of their illness, together with their carers.

As far as the proposed building of a hospice in the Algarve is concerned, the authorities at first looked on the idea with suspicion. Portuguese people have not yet made any referrals, since they do things in a different way and they have not yet seen the benefits. Madrugada at present consists of an Assembleia Geral headed by Dr Paulo Morgado (see chart here), the Direcção with Alison in charge and the Fiscal Council with Dr Hugo Pereira (Direcção Financeira do Centro Hospitalar do Barlavento Algarvio) as its President.  While there are Portuguese involved with the Project, it is clearly necessary to open channels of communication with other Portuguese associations and the Portuguese community as a whole, and Alison is confident that this change will happen with time.

So how did Alison come to lead a charity organisation as its Executive President?  For a start, she is not scared by the scale of things.  At home after having her children, she contacted her brother in law (a Cordon Bleu Chef) who suggested that she could set up a catering company and put her domestic science training to good use. Her first job was at a country house where she contracted to cater for over two hundred people.  "You just get on and deal with it" she said.  She later worked in educational psychology, clinical psychology and counselling, work which she loved.  "It is as much about personal growth as helping others" she added.  Later, in corporate training, she was working flat out and had three remaining training contracts in London when in 2002 her husband suggested that he convert part of their farm to a consulting room.

Would she be able to run her own counselling service from home?  "It went very well from the first advert" said Alison.  She discovered that working with people on a one to one basis is a privilege and that what she really wanted to do was to be of service to others.  As Madrugada takes off, she and her teams are certainly doing just that.

If you want to donate, volunteer, seek a referral contact  www.madrugada-portugal.com