Jubilee Celebrations - fit for a Queen

A lovely bunch of people came together at Pinetrees Riding Centre last weekend, on Saturday 4th to celebrate the Queen´s Platinum Jubilee in style and support two charities which would no doubt have Her approval; The Royal British Legion and the Algarve Horse Alarm.

These charities were represented by Dawn and Stephen Bland of RBL, and a lovely group of ladies from the AHA who came along to showcase their good work.

The 3 tier rosettes - in red, white and blue - were sponsored by Algarve Plus Magazine and supplied by Jinny Harman. A dozen or so kiddies dressed up for the Fancy Dress class with the theme of Royalty. There was a Snow Queen, a Kings Guard, Richard the Lion Heart, and so on, with plenty of imagination and fantasy in abundance. Judge Rosie Banks decided on a joint first place with Luigi Vasconcellos as a Roman Emperor and Arabela Coppo as the Queen of Love (her horse Suan was also beautifully attired with hearts in his mane, tail, and bridle). 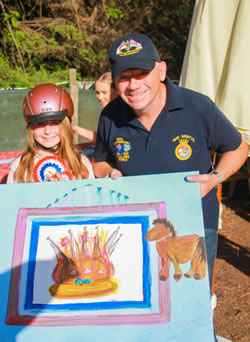 A real treat was in store with a display to the music of Beauty and the Beast by Emanuel Correia riding the Lusitano Taranto, and Daniel Andrade riding the Andalusian mare Electra. These Ambassadors for Portugal had the Portuguese flag on one side of the saddle cloth and the Union Jack on the other side, to show the centuries-old links between Portugal and the UK since the 14th c Treaty of Windsor when an English princess, Phillipa, married the king of Portugal, João I. The white manes and tails were plaited and decorated with ribbons of red and blue. Electra, at the end, showed what a clever mare she is by doing a Piaffe and Taranto did his party–piece by bowing to the audience!

The beautiful flower arrangements, by Samuel Padfield of Arquiscape, around the arena and in the social area were in red, white and blue and lovingly created the atmosphere for the theme of the day. The catering was just what her majesty would choose, with delicately cut sandwiches (but not marmalade), scones and cake organised by caterer Jane Kemp and ably assisted by Liz Atkinson and Sue Barnes.

Emanuel and Rosie judged the Obstacle/Handy horse competition by attributing up to 10 marks for each phase; obstacle number one was the Hampton Court maze, then the Hyde Park serpentine, followed by the Portuguese and English jumps, collect one of the King´s rings, and then into the Castle of Windsor and then finally sitting on the throne and putting a crown on the head to stop the clock.  It was a great way to challenge the youngsters riding abilities through the imagination. The horses, it has to be said, were real Pro´s being so collaborative and patient. Catarina Galego, riding Pushkin, were the overall winners with the highest score.

Filly Carter won the prize for the art competition with an amazing composition.

The event was supported by local British businesses. Sienna Lamb from real estate company Noble Properties, and Sam Mills of Crafty Creations helped present rosettes. Vouchers were presented by Algarve Aunties and Equiloulé, so all the competitors got a prize. Oh, and I nearly forgot, Kate and William popped in to meet the crowd.