A Valencian farmer group has sounded the alarm about the ‘rapid and irrepressible’ expansion of African citrus psyllid (Trioza eryteae) detections on citrus farms near Lisbon.

The map below, courtesy of the Portuguese Ministry of Agriculture, shows the spread of the African citrus psyllid.

The insect is one of two vectors known to carry the disease Huanglongbing (HLB) – also known as citrus greening – with the other being the Asian citrus psyllid (diaphorina citri). The disease however has not yet been reported in the European Union.

In a release, The Valencian Community’s Unió de Llauradors i Ramaders (Union of Farmers and Ranchers) said the vector had recently been confirmed just south of Lisbon in the municipality of Almada.

As a result, the buffer zone around detections now includes a substantial portion of commercial citrus plantations in the Tajo Valley.

“The aforementioned vector has ceased to just be located in gardens and private properties, as up until now it is found within or just a few kilometers from an area of more than 1,500 planted hectares, mostly with oranges,” the union said.

“Such a location makes the focus point just 190km (118mi) from the first Spanish citrus plantations in the province of Huelva (the second-most relevant in Andalusia with around 19,000ha) and just 170km (105mi) from the main citrus-growing area in the neighboring country, Algarve, with a further 14,600ha.”

The union added it was also threatening for the neighboring country’s industry that further north the infected zone has also expanded to the area of Aveiro with three detections since July in Oliveira do Barro, Anada and Figuera da Foz.

The buffer zone for these areas lies just kilometers from Coimbra, which the union highlights has a major nursery sector producing some 1.2 million plants a year.

“The situation is, in terms of phytosanitary security, so critical that Portuguese authorities have already regulated the conditions in which citrus nuerseries can operate in order to by considered – since Jan. 1 – as free of this insect and thus not suffer from the restrictions applied to halt its expansion,” the union said.

“These measures happen in isolation through covers that guarantee the biosecurity of all the plants through their vegetative cycle.”

The group mentioned the pest first moved into Portugal in 2014 from the northern Spanish region of Galicia.

“For some of the world’s citrus powers, as is the case in the United States, Mexico and Brazil, HLB has caused millions in losses and even threatens the sector’s subsistence as there is no known cure,” the union said.

“All experts in the area warn that the Spanish citrus industry faces its greatest threat since the Tristeza disease in citrus, which took out a large part of our plantations at the end of the 50s and in the 60s.

“In any case, since the irruption of the vector, the arrival of the disease (of the bacteria, which it must be reiterated is still not present) has just been a question of time.”

The union has urged the Ministry of Agriculture to treat investigation, controls and vigilance in relation to the vector or the disease as a “question of the state”. 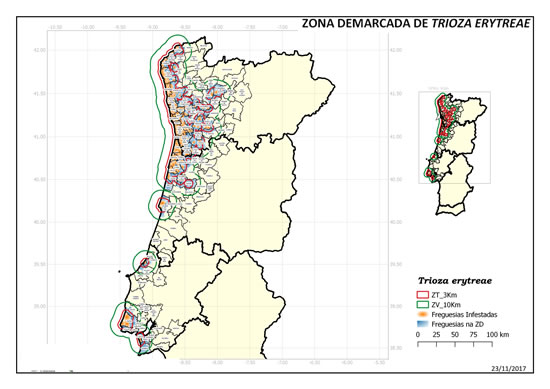