The mechanical world view of things presupposes simple linear mathematical thinking. Primary school maths, year 3: taking the example of an area measuring 100 metres by 100 metres, which makes 10,000 square metres or one hectare, an agro-industrial farmer harvests around ten tonnes of fruit from the area of one hectare.

From then on, this numerical value counts as the measure of all values for a business plan. You can use it to calculate your profit in advance, get easier access to EU subsidies, or even a bank loan.

So, the investors' expectations about the profitability of a monoculture fruit plantation are based on 10,000 kg of fruit per hectare per year, which they can turn into cash.

A saleable avocado, for example, weighs an average of 250 grams. So much for the calculation, so much for the mathematical rule of three. Three variables remain. What price will the fruit achieve in the market? How and to where will it be transported, exported? And, last but not least, has the farmer calculated everything correctly or will the great unknown, Nature, give him cause for concern?

If the fruit is an orange, it will be worth no more than 25 cents per kilo. If we take lemons, the price is nearly double that. But people are greedy, and clever too. It could also be a few cents more, because, as is well known, a hundred cents make one euro. Perhaps the fruit that plays the main role in this story will even achieve a price of one euro fifty a kilo? We're talking about the scarce green gold of vegans and vegetarians, the avocado. It is intended for export from Portugal and Spain to northern Europe.

For every harvest, 76 hectares can earn the tidy sum of 1.08 million euros a year at a price of one euro fifty a kilo. A pre-tax profit in the third year of business of almost a hundred percent, assuming an investment of 1.3 milllon euros at the outset. And, if you have a few friends who, for their part, sit on a commission that supports you with EU subsidies worth 600,000 euros, the story is almost perfect. An inspired business idea indeed. All that's missing is the ground, the soil.

No sooner said than done. We're in Barão São João in the municipality of Lagos in the beautiful Algarve.

ECO123 leaps from year three maths, jumps a few years and lands in year twelve biology, chemistry and physics, adds in philosophy, psychology and moral education and dives into a circular thinking process. Because one's view of things doesn't stop at the spectacles on the tip of one's nose. All school subjects taken together produce an overall picture that is as exact and as accurate as possible. This places several current scenarios at the heart of its cyclical observations.

Risks: what would happen to the harvest of a whole year if a plague of grasshoppers ate all the leaves of the avocado trees in the monoculture; what would happen if bad weather with storms, tornadoes, hail, heavy rainfall and floods destroyed the whole of a year's harvest; and what if artificial irrigation had to be severely restricted owing to a long period of drought?

Three possible scenarios for a plantation of 21,000 avocado trees on a 76-hectare site. None of it is a problem, an agro-industrial farmer tells the authors of this story. It's all well insured. He said they had found a good insurance company that would pay him for every harvest in the event of loss. Really? A

re insurance companies in times of climate change still so credulous that they will insure major linear projects and monocultures? The Munich company Allianz has a very different view of things. ...

The read to the end of 'Monoculture: an outdated model' click HERE 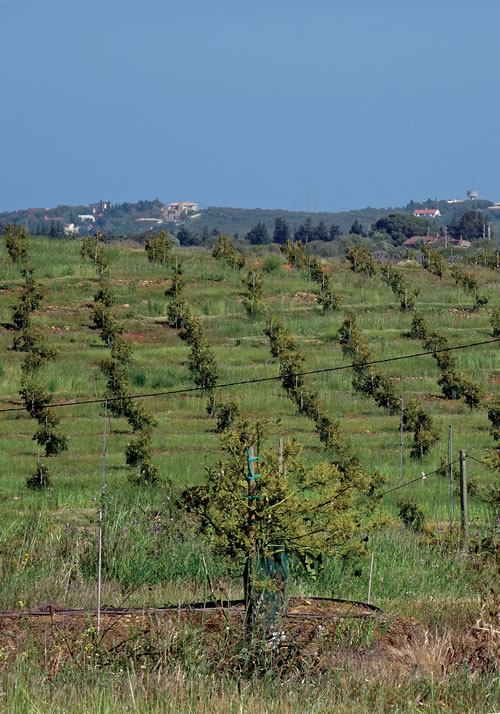 Sir, your report appears to need updating. Some 50 hectares of ancient olive groves, carob and pine trees have been systematically destroyed on a site just North of Espiche. over the last two weeks. It is only a matter of time before consent ( if indeed any will be sought ) is given to remove a large number of cork oaks on the site. Will common sense ever prevail over politics and pursuit of the almighty Euro?

This report was in 'ECO123 Summer 2018' so, as things move fast in the world of monoculture due to its unpopularity, I am sure there have been many changes already.
0 #2 Yitshak 2018-07-08 10:32
Sir, your report appears to need updating. Some 50 hectares of ancient olive groves, carob and pine trees have been systematically destroyed on a site just North of Espiche. over the last two weeks. It is only a matter of time before consent ( if indeed any will be sought ) is given to remove a large number of cork oaks on the site. Will common sense ever prevail over politics and pursuit of the almighty Euro?
0 #1 Verjinie 2018-07-07 14:14
Do I see ample, natural, wild-spaces between the trees - giving under-valued insects a chance? :)
Refresh comments list