The Copenhagen Cathedral Choir recently performed at the Jerónimos Monastry in Lisbon, with 900 people cheering a choir of 30 children, 14 adults and one harpist.
Since 1991, conductor Ebbe Munk*  has been in charge of this group which, since 2000, often has worked in partnership with other Nordic choirs and those from Cambridge, Oxford, Princeton and Brussels.
In Denmark, the fixed costs were covered by the Ministry of Culture, the Copenhagen Council and the Church. Trips and tours abroad need sponsoring by funds, and by the Association Friends of the Choir.
The selection process for an education in clerical music is a tough  one. Each year, around 250 children in the 4th grade, apply for a place. From these, only 48 are accepted for basic after school music study of 2 to 3 hours a day.
Of these, only 24 qualify and just 16 selected as singers.  Including those from previous years, up to 30 go on tours.
The children sing in the choir until their voices begin to change. When there is no show or turnée, they rehearse in small groups or, all together, twice a week and on Sundays, they perform in the Cathedral.
Some wonder if they ever make any money. Many current professional singers, whether classical, jazz or pop, came from this choir, which gives children all the necessary voice and musical tools with which to pursue a career.
Next year, this choir will make a extended tour to China. Ebbe dreams of returning to Portugal and performing in the large auditoriums of the Algarve, Coimbra and Porto. He says that, as in other events, if an impresario charges a modest ticket price, an institution finances the travel and local families receive two children for two nights at each destination, he can finance the travel of the adults and the technicians.
The number of children that can be brought along depends on how many local families can put them up.
The Copenhagen Cathedral Choir has already gone to Salamanca, Seville and Malaga; from where it will fly to Cambridge to perform at King's College. 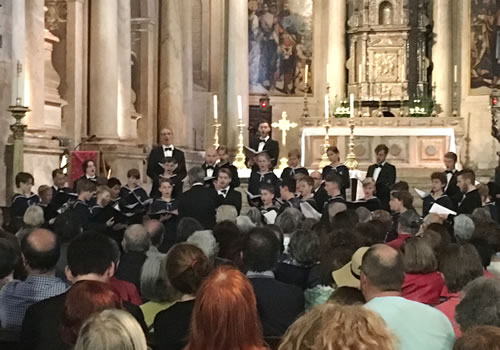 * Ebbe Munk has been the conductor of the Copenhagen Royal Chapel Choir since 1991, a year after the choir had won the first prize at the Concours International de Chant Choral in Narbonne. Munk was himself a chorister and later read musicology at Copenhagen University.
After studying choral conducting in Dresden, Munich, Budapest and the United States, he founded the Chamber Choir Vox Danica, specialising in modern choral music. The many CDs he has made with this choir, especially of Danish choral music, have received considerable acclaim both in Denmark and abroad.
Munck has performed at many concerts in Europe and the United States with both Vox Danica and Sankt Annæ Gymnasiekor which he conducted from 1982 to 1991.
It is, however, primarily as the conductor of the Copenhagen Royal Chapel Choir that Ebbe Munk has performed in concert halls and cathedrals all over the world. With this choir he has also conducted a number of major works in the choral repertoire together with leading Danish orchestras, and is involved in the production of many CDs of Danish choral music from the eighteenth century to the present. Since 1991 Ebbe Munk has also been choirmaster of Copenhagen Cathedral, often appearing at choir festivals and seminars in Denmark and abroad.
Tweet