The south of Portugal is more than just sun and beaches.  Proactivetur’s João Ministro devotes himself to promoting the Algarve’s inland area, but in a responsible way. Enjoy the Algarve talks to João about attracting young people to the countryside, preserving traditional crafts and the recent popularity of ecotourism. 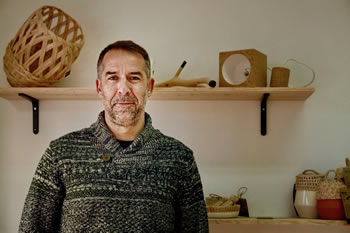 “The Algarve has been badly managed for many years,” says João Ministro (43). Unlike other people who might share this opinion but don’t act on it, João decided to make a change: “I felt the need to show there were other successful options than just building another big resort and aiming for mass tourism.” In 2004, his passion led to the development and management of the Via Algarviana, the 300km inland track that connects Alcoutim in the northeast to the Cabo de São Vicente in the southwest. Apart from that, João is also the man behind the Sagres Bird Watching Festival, Associação Almargem and Proactivetur.

'Nobody wants to watch birds', they said

Although the Via Algarviana itself is quite an easy road to walk, João’s own path of bringing more walkers into the countryside was a difficult one: “All over the world, the Algarve is mostly known for sun and beaches. That got me a bit frustrated: there are so many more unique things the south of Portugal has to offer, but all these things were either ignored, not known or not appreciated.

The Algarve is more than just golf!” João, who studied environmental engineering at the University of Algarve, decided to specialise in nature conservation and sustainable tourism. Think hiking and birdwatching instead of beach bars and banana boats. “I don’t find the Algarve’s south coast very interesting; I’ve always felt a stronger connection to the hills and mountains,” he admits. 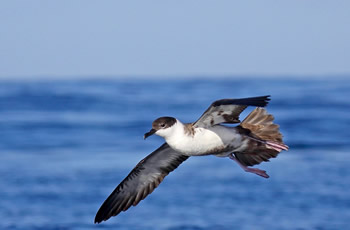 Still, not everyone immediately understood the touristy potential of the serra. Back in 2004, when João started the Via Algarviana, the Algarve Tourism Board wasn’t yet a partner of what’s now the most famous track in the south of Portugal. “They didn’t realise the popularity of walking tourism in other countries yet,” explains João. “After we showed them, eventually they did come on board.” It was a successful process, but a slow one.

Same story for ornithological tourism: “About 14 years ago, I went to the Algarve Tourism Board to talk to them about birdwatching. ‘Nobody wants to watch birds’, they said. Now they realise that in the UK alone, there are already millions of enthusiastic birdwatchers.”

In 2010, João got “tired of dealing with the bureaucratic stuff,” quit and decided to create his own travel agency: Proactivetur, which, since 2013, also manages Projecto TASA. His focus on the Algarve’s inland area stayed and creative tourism was added to his portfolio.

With his own company, he initially ran into similar issues: “For many years, traditional crafts were seen as ‘work for poor people’, also by the politicians and the Algarvians themselves. In the beginning, people were sceptic, but things have changed for the better; now, there’s more open-mindedness.” 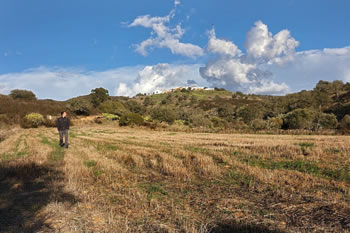 With this changing mind-set came economic success. Many people living along the Via Algarviana now make their living by offering rural accommodations to walkers. “Of course, sun and beach will always be the Algarve’s main attractions, but it’s nice to see people are more aware of all the other options nature has to offer, especially in autumn, winter and spring.” The biggest change is that the potential of natural and cultural tourism is understood better.

João isn’t there yet. On the top of his to do list: attracting more young people to the countryside. “On the first half of the Via Algarviana, between Alcoutim and Salir, nearly all rural accommodations are managed by ladies of 70 years and older. In a few decades, they’ll die.” In the Algarvian countryside live way less people than on the coast and this difference is getting bigger each year.

An example: the population of Querença decreased around 40% between 1981 and 2011. João: “Every week, people die in the countryside. But hardly ever people are born there. If we don’t do anything, in the next 10 to 15 years, many small villages will be completely abandoned.” Barrigões and Cabaça already are ghost towns, all the houses there are empty. And if it weren’t for foreigners moving to Carriços, that place would also soon be forgotten. 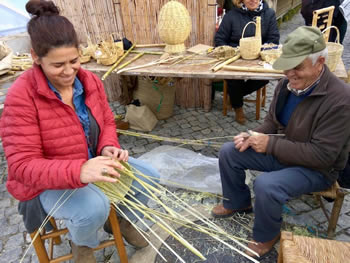 On the second place: keeping the Algarve’s traditional crafts alive: the only tinsmith in the Algarve lives in Moncarapacho, is 83 years old and deaf in one ear. A recent course got four youngsters interested in tinsmithing, but the danger of extinction isn’t over yet.

Same goes for other crafts such as weaving, pottery and working with cork. “The council says ‘yeah, it’s very important to keep these crafts alive’ so I ask them what they do to preserve it and they’re like ‘well, we organise a small market’ – it’s not enough. More needs to be done to make sure the serra and its traditions are kept alive,” says João. But why is this so important? If no-one wants to live in the countryside, why not let everyone move to the coastline instead and let the inland become abandoned? And if people would rather order a basket on the internet than learning how to weave one themselves, why not let them?

The answer, João explains, has several aspects. There’s of course the cultural side: if these old people die without passing on their knowledge, so does their gastronomy, skills, crafts and traditional farming methods. The average age of the over 45 artisans who are involved with Proactivetur is 62 years. If we don’t act, we’ll lose this cultural heritage, and will only be able to see it in museums.

The second is the environmental aspect. Unlike Alaska or the Amazon, the Algarvian landscape isn’t 100% natural. It has been managed by men for thousands of years. To preserve the state of the landscape, we need to continue doing this. Abandoning the countryside will lead to problems with fires and soil. 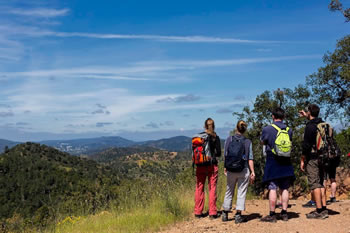 The third aspect is the social one. Places like Alte, Salir, Querença and Ameixial are still important social hubs. But sadly since the crisis the government has closed many schools, health centres, courts and post offices in the smaller countryside villages to reduce costs. “I’m not saying that suddenly thousands of people have to move to the countryside, but just leaving the elderly there to die alone isn’t a solution.

Sometimes they lie dead in their house for three days before they’re found and that’s quite sad,” states João. Last but not least, there’s of course the economical aspect. For growing cork, you need a forest – and someone who manages it. Honey isn’t produced in the middle of a city centre, and neither is Medronho. To continue these popular countryside export products,  people need to live there and do the work.

“I hope in the next decades, more young people will move to the countryside and old knowledge, crafts and traditions will become valued again,” João enthuses. Still, not at all costs. He isn’t that enthusiastic about new projects such as Quinta da Ombria, a luxury resort with hotel, apartments, town houses, villas and a golf course, that’s currently being built between Querença and Tôr. “Fifteen years ago, it was promoted as a project which would save the countryside by bringing employment and business opportunities.

In reality, the majority of the workers aren’t even from the Algarve,” says João, who complained against this project to Brussels back when he worked for Associação Almargem, because of environmental issues such as potential problems with water, pollution, excessive water use and destruction of natural habitats. Apart from water shortage João’s main worry now is that the luxury resort ‘isn’t right for the area’. “It’s importing the coastal type of resort, such as for example Quinta do Lago, to the countryside. And that isn’t correct. The countryside needs different kind of projects that aren’t managed by big companies.” 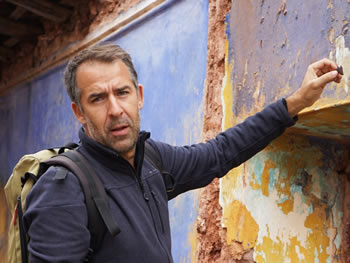 João’s ideal vision for the Algarvian countryside would be ecotourism. Which isn’t the same as nature tourism: a group of birdwatchers visiting a national park by bus and spending two hours there before returning to their hotel and restaurant in Albufeira is nature tourism, but not ecotourism. That would be if they’d stay at a local place, eat local food, spend their money locally and interact with locals.

Ecotourism involves preservation, protection and leaving something to the territory, mostly economically. It’s not always necessary to leave money though: if people from Holland, Germany, Belgium and the UK visit a remote Algarvian mountain village, the people living there will realise this place is important and will work towards preserving it. This already happened with the people living close to the Via Algarviana, who are now more engaged with the protection of their local area.

When done well, ecotourism raises the pride the local people take in their land, and, when it comes to artisans, it also increases their self-esteem. Many traditional Portuguese crafts exist because farmers needed extra money in the past. They’d weave baskets and ropes in their spare time, which they’d sell on the markets for a few escudos. Many of these artisans have spent the last 40 years making baskets, without anyone ever paying proper attention to their craft. Now, suddenly people get interested, want to learn these arts and follow workshops. Instead of old-fashioned, it’s appreciated, revalued and recovered. 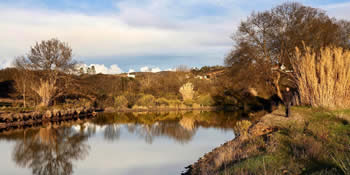 This recent shift in tourism is very visible in the south of Portugal: tourists are currently looking for genuine, traditional encounters and adventures. They want to learn more about the country they’re visiting than where the best beaches are – sun, sea and sand isn’t enough anymore. This change in demand has made tourism agencies more aware of the fact they need to offer authentic and practical experiences.

“More and more tour operators are asking us to include workshops where people get to engage with the local community,” confirms João. “After all: what people will remember of their holiday is that walk in the wild where they met a shepherd with his goats and talked to him about his life. They’ll think back to the time they spent making traditional food or learned about cork in an old man’s house. That’s what they’ll take home, memories of the authentic Algarve.”

This article first appeared in the May 1st edition of Enjoy the Algarve and is reproduced with its kind permission.

To read the May 1st edition, click on: Enjoy the Algarve