Portugal’s dry conditions have contributed to dozens of serious fires, the worst of which is still blazing across Serra da Estrela national park tonight, Tuesday.

Over 400 firemen are trying to tackle the blaze which started on Monday afternoon but have had no lasting success.

According to the National Civil Protection Authority, the Serra da Estrela fire started at 14:46 on Monday, in the countryside at Senhora do Monte in Gouveia and had spread into the Manteigas council area by the end of the day. On Tuesday evening there were nine active fires registered on the authority's website, 17 council areas on maximum alert, and an estimated 6,000 firemen working to douse the flames.

Outbreaks in areas that already had been dealth with, poor access to the fire and the wind which regularly is changing direction, all are hindering the actions of the firemen battling the blaze in Serra da Estrela, according to the District Command of Relief Operations.

"There are villages threatened" by the flames as the exhausted firemen again work into the night.

Fires in the Algarve have been dealt with swiftly with fire chiefs keenly aware of the negative publicity caused in by the extensive destruction of the countryside’s trees and crops.

This year's summer fires mostly have been in the north and centre of the country and the police report that most may have been set deliberately in acts of insane stupidity for which convictions are scarce.

According to Portugal’s weather service, 79% of the country is facing a “severe to extreme drought.” The current fire risk is at the highest level for 16 year across the country with the hot weather predicted to remain for weeks ahead.

In 2003, 2005 and 2013, ill-equipped firemen were unable to combat many fires in Portugal which then ran out of control.

Until Monday’s fire in Serra da Estrela, better resourced fire teams have managed to quell the flames of hundreds of outbreaks within 24 hours. 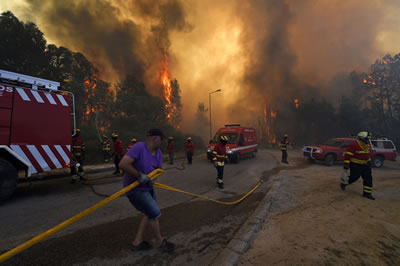 This reminds us that so many important families in Portuguese forest areas do not just own the forests. They own the timber extraction teams and haulage companies.

And the pulp mills and pellet factories pay for timber by weight. Burned timber is only superficially damaged so still heavy - although the timber fellers will pay the tree owner far less for it as damaged than they then get paid by the mill.

One of the expat websites had a story of a big name Freguesia President a few years ago passing these foreigners in a woodland that later that day was torched. Again - this Presidents family being big landowners and him having the men and lorries available to cut down and remove the trees. Then the power - with his other 'VIP' mates - to re-designate the land for development.

Its another type of jihad they are committing against the west, part of their jihad and plans to overthrow andalusia for their so call caliphate.

The aim is to damage portugal And spain economically, and enviromentally.

To cause pain, and suffering to the infidels.
Its promoted in their jihad manuals online, but the media will not mention these facts to the public. Because they fear being labeled as "racists!"

Its like the 1400 young english girls groomed, raped, and pimped out in rotheram england, by muslim rape gangs, all nicely covered up for over 15 years by social workers, police and the news media! Because of a fear of being labeled as Racist! And to keep it all covered up in the name of community cohesion.
+1 #1 Simon Williams 2015-08-12 08:02
These arsonists are totally out of control ! By the Civil Protections (ProCiv) own estimates up to 80% of fires are intentional arson.

Yet we can see from their figures that this month August alone twice there were over 300 fires in a day (one day 380 fires!). An average of around 200 a day.
Refresh comments list