Burns, who founded Dead or Alive in 1980, died of a cardiac arrest at the age of 57. The group found success through the 1980s and had seven Top 40 UK singles and three Top 30 UK albums. They were the first group to have a number one single under the production team of Stock Aitken Waterman.

Burns was probably famous to a new generation for his dancing on Celebrity Big Brother with George Galloway in 2006 and for openly insulting actress Traci Bingham on the same show. "You Spin Me Round (Like a Record)" (from 1985's Youthquake album) was re-released as a result of his new-found fame.

“All of his family and friends are devastated by the loss of our special star. He was a true visionary, a beautiful talented soul and will be missed by all those who loved and appreciated everything he was and all of the wonderful memories he has left us with.” Read a statement from his partner, Michael Simpson, his ex-wife, Lynne Corlett, and former band member and latterly his manager, Steve Coy.

Burns was born in Cheshire. His German alcoholic mother frequent attempted to kill herself. She had survived the Nazi death camps and married a Liverpudlian father thus providing an ‘unconventional’ upbringing for young Pete.

“As far as parental skills go in the conventional, normal world, she certainly wasn’t a mother, but she’s the best human being that I’ve ever had the privilege of being in the company of, and I know that she had a special plan for me,” said Burns. “She called me ‘Star Baby’ and she knew that there was something special in me.”

Burns left his Liverpool boys school early at the age of 14 after he was summoned to the headmaster’s office “with no eyebrows, Harmony-red hair and one gigantic earring.”

He then worked in a record shop in Liverpool, where he formed the Mystery Girls band which played once (opening for Sham 69 at Eric's in Liverpool in November 1977), then forming Dead Or Alive in 1980 with Mike Percy, Steve Coy and Tim Lever.

Even for the 80s, Burns’ sexuality and eclectic dress sense became famous but lived in the shadow of Boy George whose interesting stance on traditional gender markers was gaining headlines alongside a top-selling musical career with Culture Club.

Burns accused Boy George of ripping hum off in terms of his flowing dress sense but the two shared the '80s stage with George in the forefront due foremost to his musical ability.

On hearing of Burns’ death, Boy George commented, “Tearful about the passing of Pete Burns, he was one of our great true eccentrics and such a big part of my life! Wow. Hard to believe!”

Burns joined season four of Celebrity Big Brother and was an instant hit with an audience mostly unaware of his former moment of fame. His Lycra-clad dance with former MP George Galloway was perhaps the low point for both.

Galloway Tweeted , “Sad to hear of the demise of Pete Burns. He was a cross between Oscar Wilde and Dorothy Parker. You don’t get more brilliant than that. RIP.”

Marc Almond of Soft Cell, another 80s sexual boundaries basher, tweeted: “We’ve had some mad times with Pete but he was a one off creation, a fabulous, fantastic, brilliant creature and always sweet to me.”

Surprisingly, Burns married Lynne, a hairdresser, in 1978 with the couple only separating in 2006 with Burns then marrying his partner, Michael Simpson.

Burns was addicted to plastic surgery, undergoing an estimated 300 operations mainly on his face. “Changing my face is like buying a new sofa” there’s “not a part of me, apart from the soles of my feet, which has not had work done. For me, plastic surgery is a matter of sanity, not vanity.”
In the true tradition of second rate pop icons, Burns went bankrupt after enormous reconstructive surgery bills covering 18 month in an Italian clinic after a lip operation went horribly wrong.

His solo singing career never again hit the big time he had enjoyed in the 1980s but he always acted like the star he felt himself to be. His last release, Never Marry an Icon, was released in 2010. 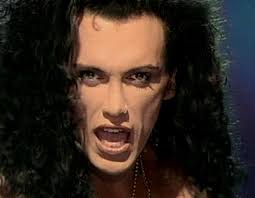 Burns, before decades of plastic surgery

See also: 'Pete Burns – provocateur with a pop brain and a sensitive side'