If you live in a village in Portugal, you’re likely to have an abandoned school building in your immediate neighbourhood. Certainly in the Algarve there are numerous examples of abandoned schoolhouses, some have been sold or are up for sale, but the majority remain under local council ownership and don’t appear to have a very bright future ahead.

These sad neglected buildings were once part of an initiative to ensure that all children had local access to primary education, the aim of course being to increase the level of education of the whole population. The 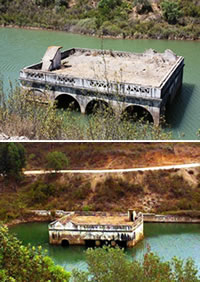 programme, called the Plan of Centenarians (Plano dos Centenários), was launched by the new state (Estado Nova) in the 1940s. A total of 7000 schools, amounting to 12,000 classrooms, were built across Portugal as part of the project. Each building followed the same architectural model - traditionally Portuguese - and was adapted to suit local conditions where necessary. The style of these 1940s schoolhouses became a trade mark across the country. 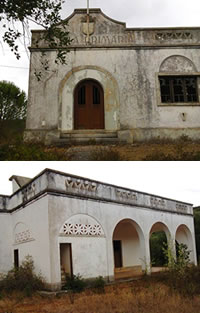 Pictured here are two identical 1940s Algarve schoolhouses: the first has since become partly submerged in the Barragem do Funcho, Silves and the second is standing derelict close by in Perna Seca. Although the top arches of the windows and doors are only just visible above the water in the first two images, you can clearly see the iconic architecture at the front and rear of the buildings.

Schools in some of the more remote locations would have just one classroom, to accommodate the few local children. A number of these schools are still operating as primary schools, but the vast majority were decommissioned during the 1990s and their students diverted to larger establishments in nearby towns.

The slightly more modern model (right) is another example of a decommission village school in the Algarve.

From the early 1970s, the Plan Centenarian model was superseded by a more modern, open-plan design (bottom left) which originated in Scandinavia. This type of school building is now common in Portugal.

Many village schoolhouses built in the Algarve around the 1940s have been decommissioned. But with a little imagination, a number have the potential to be converted into cosy homes or businesses, like the charming rental villa in Albufeira (below right) – so why have so many been left to deteriorate?

It’s a rare opportunity to buy one of the Algarve’s former village schools, so if you fancy a home with an interesting history, have a look at these two currently listed for sale on Meravista.com.

Cottage in the country
This is a great example of a former schoolhouse (left), that’s now a cosy cottage in the Loulé countryside. Located in the small hamlet of Ameixial, close to São Brás, this three bedroom home has lovely countryside views. Carefully renovated to retain its traditional features, with the addition of a beautiful pool and priced at only €225,000, this property is a perfect country residence.

Restoration project
Again in the Loulé hills, is another opportunity to buy an old schoolhouse (right) for just €112,000. This one is in need of renovation, but has fantastic potential with its sea and country views.

There’s no shortage of properties for sale in the Algarve with an interesting history included in the price; from old convents to wineries and converted mills – why not take a look?

NOTE: The properties featured here were listed for sale on Meravista.com at the time of publication, but may have since been sold or removed from the website.