Slavery in the Alentejo

Everyone likes to have cheap food – but there are limits, and one limit that’s been hiding in plain sight over the last ten years or so finally saw the light of day last week.

Just to the north of the Algarve on Portugal’s west coast lies the Parque Natural de Sudoeste Alentejano e Costa Vicentina, (PNSACV), and this is where a great deal of the soft fruit is grown in Portugal - and we’ve all benefitted from the low prices in our supermarkets.

However, it seems that these low prices have come at a great cost to the agricultural workers, the eco-system and to the region’s water supply and, while it’s been highly visible to residents of the area for the last decade, it has taken the Covid pandemic to bring these problems to a wider audience.

It all started when the two Freguesias of S. Teotonio and Almograve, (both wholly inside the PNSACV), were put under a Cerca Sanitária, (Sanitary Cordon), a couple of weeks ago due to the high Covid ratio prevalent in the area.

Police road blocks were set up on all access routes into the two Freguesias and no-one has been allowed in or out for two weeks – or that was the plan anyway, but this soon fell apart, for, while no-one was meant to be allowed in or out, this rule apparently didn’t apply to the agricultural workers being bussed in to pick your cheap fruit, and this enraged the local residents.

It turns out that these agricultural workers almost wholly consist of Nepalese, Pakistanis and Indians, and, while the local residents of the area, like the vast majority of Portuguese, have been welcoming and inclusive towards these economic migrants, they pointed out, quite reasonably, that the high Covid ratio in the area was 80% confined to these migrants, whose numbers were being included in the Covid ratio numbers, but whose numbers were NOT being included in the 2011 Census numbers used to calculate that ratio.

Whole sectors of the local economy, principally small, up-market tourism such as Casas Brancas, are being shut down by the Government through lackadaisical maths.

This caused a bit of a stir and some journalists started poking around.

What they found was modern-day slavery right here, right now.

It turns out that, though the whole Concelho of Odemira, (the largest in Europe and into which falls the totality of the PNSACV), numbers just 26,066 inhabitants there are approximately 16,000 foreign migrant workers – I say approximately as many are unregistered and their exact numbers are unknown, but at the very least this works out at more than 1 foreign migrant for every 2 local residents.

So where were they all living?

It turns out that the vast majority of them are living in squalid conditions crammed like sardines into insanitary flats and tiny houses dotted around the area. Cases of 30 men in a two bedroomed flat were found, with no hot water, some with no water at all.

The journalists kept digging and slowly, but with an increasing speed, like a boil being burst, out came more and more oozing filth until, despite the Government moving people illegally in the middle of the night, the full scale of the weeping wound could be hidden no longer.

Many of these migrants are paying “gang masters” to have the chance of working, (the Mafia on your doorstep), they’re being paid a pittance, (the reason the local Portuguese won’t work there), and are sending the majority of what little is left home to their families, meaning they’re caught in a never-ending cycle of what can only be called slavery.

But the ooze didn’t stop there, for as the spotlight was turned onto the agricultural companies who were keeping them in these conditions it soon became apparent that none of these companies, (most of whom are foreign-based), was licensed – for licenses are not apparently needed if the intensive agriculture that these companies are undertaking is in plastic greenhouses.

And intensive it is, make no bones about it. Agriculture in the area uses approximately 35 million cubic meters of water per year, more than ten times that used by the human population.

It isn’t rocket science to see that the legal objectives of the whole PNSACV have been flouted by these large, foreign-owned, agricultural companies and people are starting to smell a rat.

But who’s on the take? Local or National politicians? 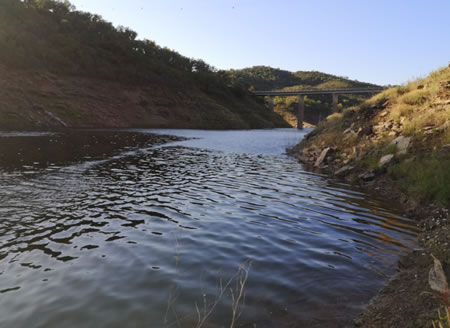 It’s still too early to say, though of course it looks to be a case of both, and at the very least it’s a lack of proper oversight at the local level, but what isn’t so hard to say is that there is little nature conservation, little to no maintenance of biodiversity and the present companies do not practice the preservation of soil and water resources and neither do they encourage the application of good agricultural practices or an environmentally sustainable agricultural activity, all founding principles of the PNSAVC.

In what is meant to be a Natural Park where biodiversity is meant to be the guiding light of all practices, there are now 1,200 hectares of intensive agricultural greenhouses – and with current plans to expand this to 3,600 it is not only a complete reversal and negation of its original founding principles, but it is also a completely unsustainable project, for, in this highly arid corner of southwest Europe, an arid corner that is widely projected to become ever more arid as the speed of Climate Change ramps up, where is the water to come from to irrigate these vast expanses of plastic?

Santa Clara Barragem waters the whole area and that Barragem, even after the wet winter with which we have recently been blessed, is only at 50% capacity.

No, that’s not a typo, it’s at 50%, the lowest level for this time of year since its construction, and we’re just at the beginning of the dry season - and of course that 50% can never be taken in its entirety.

So, at most, even with no expansion of current greenhouses or areas under cultivation, there is currently enough water for only one and half seasons, two if we’re lucky enough to have another wet winter this year.

And it’s all been there, in plain sight, for years.

But it took a Global pandemic for the truth to start to come out.

Surely Portugal can do better than this?